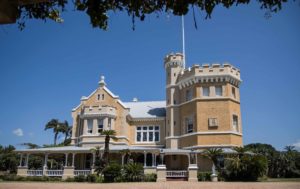 Lynton Hall was built in 1895 for Charles Partridge Reynolds, near Pennington.

The building was designed by architect, William Street-Wilson and Fyfe’s partners, James W Paton & Wishart. Sadly, the original drawings for the house have been lost.

The castellated bay, gable and tower was a look-out point for cane fires and as a defensive structure in the event of strife. The tower has one of the bedrooms incorporated into the tower, which has an open but protected platform. The interior has a grand hall and exposed pendant trusses.The interior fittings, like doors, windows, marble floor tiles and stained-glass windows and wooden stairways were imported and had to be transported by sea to this remote site, with panoramic views over the Indian Ocean.