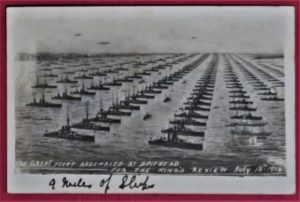 A postcard showing The Great Fleet assembled at Spithead for the King’s Review. A notation says “9 Miles of Ships” and is dated July 1914, just prior to the start of WWI. Britannia certainly ‘Ruled The Waves’.

This amazing image illustrates the Naval Power of Britain at the time but also demonstrates the huge amount of money spent on war materials. One also has to wonder how many much of this fleet survived and the number of casualties aboard these warships.