FEATURE:        ‘DENIS HURLEY AND THE GREAT DICTATORS: A reflection on Hurley’s studies in Rome in the 1930s; by eminent historian Paddy Kearney

Paddy edited the two volume memoirs of Archbishop Hurley: “Vatican II – Keeping the Dream Alive” (2005) and “Memories” (2006) and authored the first full biography of the Archbishop, “Guardian of the Light: Denis Hurley – Renewing the Church, Opposing Apartheid” (2009) and an abridged version entitled “Truth to Power” (2012). Come and hear Paddy talk about his latest research discoveries in the period when Hurley was in Italy during the days of the Fascists.

For nearly eighty years the towns of Estcourt, which was on the mainline from Durban to the Reef, and Weenen were linked by a two foot (610 mm) gauge railway, decried by Sir David Hunter GM of the Natal Government Railway ‘As a Toy Train.’ Nevertheless this narrow gauge line provided a vital link between the rather isolated community of Weenen and the links inland and to the coast. 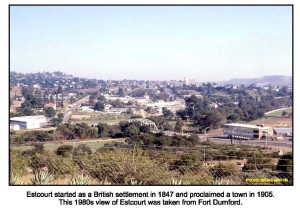 For all its isolation Weenen had the most vital commodity, and this generally in abundance, so with furrows leading water from the Bushman’s River it rapidly became the Market Garden of Natal. 1200 ha of irrigated excellent soils can produce a great many cabbages and this lead near the end of its life to this little railway earning the title of The Cabbage Line. 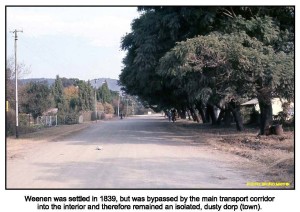 Estcourt and Weenen are little more than 40 km apart but 110 years ago the barrier of mountains and deep gorges between these towns posed a major headache for engineers and surveyors tasked with establishing a transport link. Various options were examined after the chief engineer and surveyor recommended that the two foot gauge should be used to build ‘feeder lines’. The first option was to build across country from Mooi River but this proposal was soon abandoned. The next proposal was to follow the Bushman’s River valley but this too would have created a tortuous, difficult and expensive to build and operate route. The actual route chosen followed the mainline towards Ladysmith for about a mile (1.6 km), veered away across the Little Bushman’s River and then climbed for five miles (8 km) to 4116 ft or (1254 m). In railway terms this is a truly major climb. 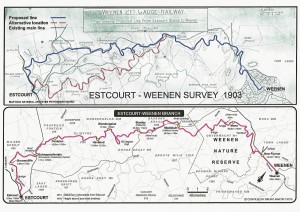 The report from JNO W Shores, Engineer in Chief of the NGR in May 1903, stated that the length would be approximately 30 miles and the cost £102000.00 for the line and £15000.00 for the equipment. In the event it was built for a little less and opened officially not much more than three years later, the very first of the NGR’s narrow gauge lines. Indirectly it also established a standard that was generally to be adopted by the sugar estates for within a few years most of these operated railways of two foot gauge. 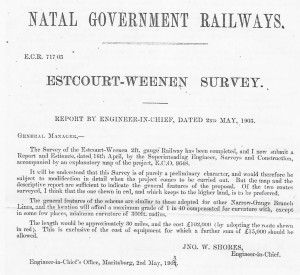 The line itself runs through beautiful thornveld with Aloes decorating the hillsides in winter and numerous avian songsters singing lustily to defend territory in the breeding season. Wildlife abounds and TV Bulpin in his travel series eulogises “Travelling on this little train of the thorn country is a real experience. It is certainly the only train in the world which gives the right of way to pythons. The inoffensive reptiles are common in the surrounding bush and the train always does its best to stop and allow them to cross the line. Numerous rock rabbits and various antelopes also have their homes along the track.”

Fortunately for the many Rock Pythons living near the line the train travelled slowly enough for the drivers to stop.

Spectacular scenery provides a wonderful backdrop for a Narrow Gauge Garratt locomotive hauling a mixed train of freight and passenger cars. But note how the line twists and turns as it climbs up from the valley. No wonder the locomotives required two water stops when travelling away from Estcourt. 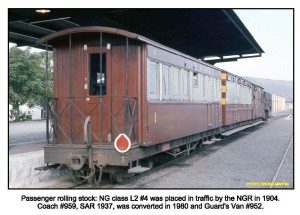 The first rolling stock used was an NGR first class coach – which was still in operation in 1983 when this little railway closed permanently. 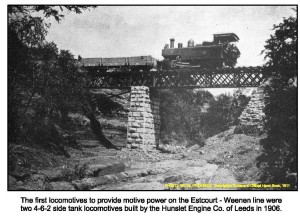 But the early locomotives were extremely small with limited hauling capability and by 1914 the South African Railways, now the owner of the line, ordered a clever design of loco which was ideally suited to this sort of railway from Beyer, Peacock & Co. But because of WW1 this took several years to arrive and only went into service in 1919.

Garratt locomotives consist of three sections; two locomotives one of which always faces the direction of travel with the cab, firebox and boiler suspended between the two locos. This brilliant design effectively doubled the hauling power whilst spreading the load over some distance, because the two locomotives could pivot independently at each end of the boiler so tight curves were negotiated relatively safely and having very light axle loads for light track. And all this was achieved with the same crew of just a driver and fireman. Within a few years two design improvements lead to Hanomag in German producing an NG Garratt which was used on the Avontuur line out of Port Elizabeth and the four narrow gauge lines in Natal. Thankfully several of these locos are still in regular use at Sandstone in the Free State, on the Paton Country Railway and back in the UK close to where the first Garratts originated and running on the Welsh Highland Railway.

Sadly floods at Port Shepstone took out the river bridge so Natalian’s can no longer enjoy trips on the Banana Express.

Then catastrophe came for the future of the railway because a bus operator was allowed to run from Weenen to Estcourt and local farmers started to increasingly use road transport so within a short time this beautifully scenic railway became an expensive branchline with running costs far in excess of income. However some had realised its tourist potential and Pietermaritzburg ran regular tours which reportedly took in the now closed Orange Winery. The local community approached the Natal Parks Board for help in turning it into a tourist attraction; it did after all run thru Weenen Nature Reserve. But all this was to no avail and following a public meeting in Weened which had been set up by the South African Railways a closure notice was issued and enthusiasts chartered the train for a final run. 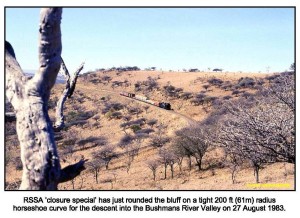 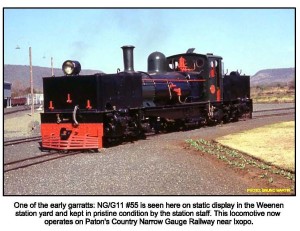 This talk and presentation would not have been possible without the invaluable and detailed input from Bruno Martin whose booklet ‘Remembering the Estcourt Weenen Line’ and wonderful archives provided much of the material. Other pictures have kindly been provided by talented rail photographers. Thank you.