The 111-yard passage nicknamed ‘Harry’ by Allied prisoners was sealed by the Germans after the audacious break-out from the POW camp Stalag Luft III in western Poland.

Despite huge interest in the subject, encouraged by the film starring Steve McQueen, the tunnel remained  undisturbed over the decades because it was behind the Iron Curtain  and the Soviet authorities had no interest in its  significance. 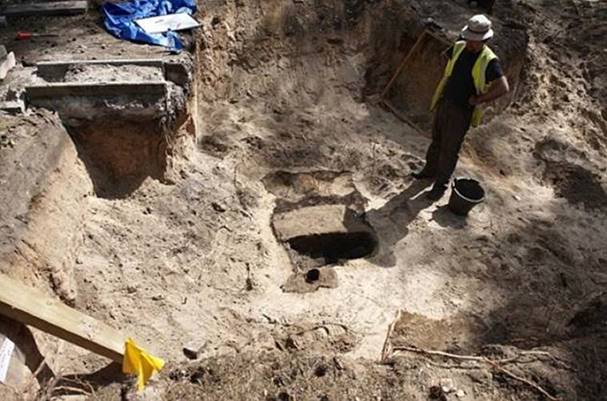 But at last British archaeologists have excavated it, and discovered its remarkable secrets.

Many of the bed boards which had been joined together to stop it collapsing were still in position And the ventilation shaft, ingeniously crafted from used powdered milk containers known as  Klim Tins, remained in working order.

Scattered throughout the tunnel, which is 30ft below ground, were bits of old metal buckets,  hammers and crowbars  which  were used to hollow out the route.

A total of 600 prisoners worked on three tunnels at the same time.  They were nicknamed Tom, Dick and Harry and were just 2 ft square for most  of their length. It was on the night of March 24 and 25, 1944, that 76 Allied airmen escaped through Harry.

Barely a third of the 200 prisoners many in fake German uniforms and civilian  outfits and carrying false identity papers, who were meant to slip  away managed to leave before the alarm was raised when escapee number 77 was spotted.

Barely a third of the 200 prisoners many in fake German uniforms and civilian  outfits and carrying false identity papers, who were meant to slip  away managed to leave before the alarm was raised when escapee number 77 was spotted. Only three made it back to Britain. Another 50 were executed by firing squad on the orders of Adolf Hitler, who was furious after learning of the breach of security.    In all, 90 boards from bunk beds, 62 tables, 34 chairs and 76 benches, as well as thousands of items including knives, spoons, forks, towels and blankets, were squirreled away by the Allied prisoners to aid the escape plan under the noses of their captors.

Although the Hollywood movie suggested otherwise,   NO Americans were involved in the operation.  Most were British, and the others were from Canada, (all the tunnelers were Canadian  personnel with backgrounds in mining) Poland, New Zealand, Australia, and South Africa. 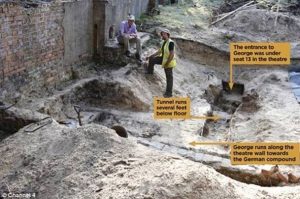 The site of the tunnel

The site of the tunnel, recently  excavated by British archaeologists .  The latest dig, over three weeks in August, located the entrance to Harry, which was originally concealed under a stove in Hut 104.

The team also found another tunnel, called George, whose exact position had not been charted. It was never used as the 2,000 prisoners were forced to march to other camps as the Red Army approached in January 1945.

Watching the excavation was Gordie King, 91, an RAF radio operator, who was 140th in line to use Harry and therefore missed out. ‘This brings back such bitter-sweet memories,’ he said as he wiped away tears. ‘I’m amazed by what they’ve found.’ 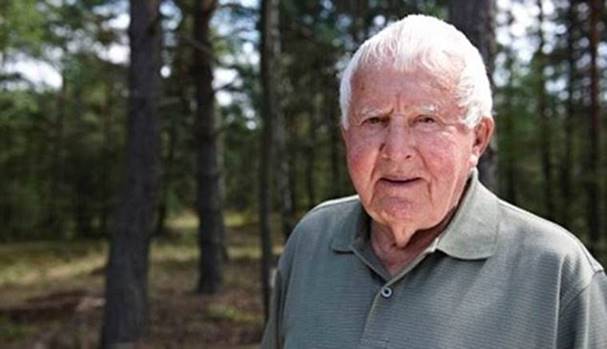 Many of the recent generations have no true notion of the cost in lives and treasure that were paid for the liberties that we enjoy in this United States.  They also have no idea in respect of the lengths that the “greatest generation” went to in order to preserve those liberties.  Below is one true, small and entertaining story regarding those measures that are well worth reading, even if the only thing derived from the story is entertainment.

Starting in 1940, an increasing number of British and Canadian Airmen found themselves as the involuntary guests of the Third Reich, and the Crown was casting about for ways and means to facilitate their escape..

Now obviously, one of the most helpful aids to that end is a useful and accurate map, one showing not only where stuff was, but also showing the locations of ‘safe houses’ where a POW on-the-lam could go for food and shelter.

Paper maps had some real drawbacks — they make a lot of noise when you open and fold them, they wear out rapidly, and if they get wet, they turn into mush.

Someone in MI-5 (similar to America’s OSS) got the idea of printing escape maps on silk. It’s durable, can be scrunched-up into tiny wads and, unfolded as many times as needed and, makes no noise whatsoever.

At that time, there was only one manufacturer in Great Britain that had perfected the technology of printing on silk, and that was John Waddington Ltd When approached by the government, the firm was only too happy to do its bit for the war effort.

By pure coincidence, Waddington was also the U.K. Licensee for the popular American board game Monopoly. As it happened, ‘games and pastimes’ was a category of item qualified for insertion into ‘CARE packages’, dispatched by the International Red Cross to prisoners of war.

Under the strictest of secrecy, in a securely guarded and inaccessible old workshop on the grounds of Waddington’s, a group of sworn-to-secrecy employees began mass-producing escape maps, keyed to each region of Germany, Italy, and France or wherever Allied POW camps were located. When processed, these maps could be folded into such tiny dots that they would actually fit inside a Monopoly playing piece.

As long as they were at it, the clever workmen at Waddington’s also managed to add:

2. A two-part metal file that could easily be screwed together

British and American air crews were advised, before taking off on their first mission, how to identify a ‘rigged’ Monopoly set – by means of a tiny red dot, one cleverly rigged to look like an ordinary printing glitch, located in the corner of the Free Parking square.

Of the estimated 35,000 Allied POWS who successfully escaped, an estimated one-third were aided in their flight by the rigged Monopoly sets. Everyone who did so was sworn to secrecy indefinitely, since the British Government might want to use this highly successful ruse in still another, future war.
The story wasn’t declassified until 2007, when the surviving craftsmen from Waddington’s, as well as the firm itself, were finally honored in a public ceremony.

It’s always nice when you can play that ‘Get Out of Jail’ Free’ card!

Some of you are (probably) too young to have any personal connection to WWII (Sep. ’39 to Aug. ’45), but this is still an interesting bit of history for everyone to know.

The “Great Escape Tunnels” are found