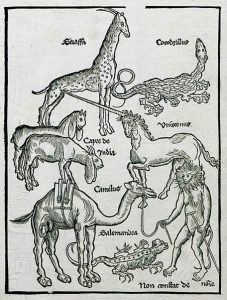 Today the unicorn is a creature of wonder and imagination, but for centuries human beings have believed in or hoped for its discovery in the real world. In one account unicorns disappeared from the earth because they missed Noah’s call to the ark. Whether or not the unicorn existed in the experience or mythology of the indigenous people of South Africa, many of the settlers from Europe, on the evidence of Bushman paintings, rumours or reports, expected to find the unicorn, which would have been a valuable trophy. This pursuit of the unicorn which continued for centuries, involved many memorable figures and offers a curious sidelight on our country’s history.

In spite of Professor (and SANS member) Tony Voss’ fairly definite guidelines about the likely nonwhereabouts of this beautiful beast, surely most of us who attended his lecture on Tuesday 8th May have since then been keeping a much more vigilant watch around the garden and in the passing countryside. After all, as Tony said, the unicorn has a price on its head. His delightful presentation was based on his very impressive academic paper published in the October 1979 edition of Theoria: A journal of Social and Political Theory. 1This in turn grew from a lecture he gave at the University of Natal Pietermaritzburg earlier the same year. 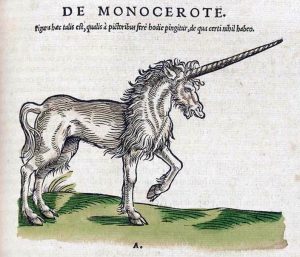 1PURSUIT OF THE UNICORN Author(s): A. E. VOSS Source: Theoria: A Journal of Social and Political Theory, No. 53 (October 1979), pp. 1-19 Published by: Berghahn Books in association with the Faculty of Humanities, Development and Social Sciences, University of KwaZulu-Natal, South Africa Stable URL: http://www.jstor.org/stable/24247680
Page 2 of 6

As Tony said quoting from his paper “South African history is a mine of unicorn lore, a veritable unicornucopia” a word far too good not to get much more use. The earliest reference appears to be from about 1695 although the famous San art showing an indubitably single-horned horse-like shaped animal may date from far earlier.

Unlike readers of the paper, however, those of us those of us at KwaMuhle Museum, were treated to many illustrations of unicorns in media as diverse as rock art, tapestry and wood carving. These were fascinating and triggered quite a few audience interactions. For although no one seems to have actually seen a Unicorn we all know exactly what it looks like and it was good to have an authoritative confirmation of our nature of the myth. Tony has used a clever device of plotting the place and date of the very many historical and natural history “sightings” and references on to maps of southern Africa. This was particularly interesting. as it showed the north easterly progression from the Cape of these incidents and opinions.

Several well-known names in the exploration of southern Africa appear in the narrative. Like Francois le Vaillant, Lady Anne Barnard, Sir John Barrow, Thomas Pringle (who even got a government grant to fund his search!) and Thomas Baines. Searching for Unicorns is serious stuff. 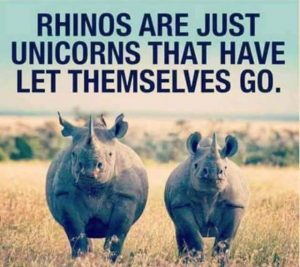 Prof Voss spent some time discussing the debates that took place about the probability that the “observed and reported” Unicorns were either a rhinoceros or perhaps the gemsbok. The latter, particularly if it has lost a horn in a fight or other incident, could at a distance easily raise a Unicorn hunter’s hopes. One searcher, Nathaniel Isaacs was rather embarrassed when the unicorn promised and produced by a local chief turned out to be “a he-goat with the loss of one of its horns”

The audience on the night was delighted and enthralled by the presentation especially as it embraced perfectly the appreciation of, the natural, historical and cultural heritage of South Africa and all its peoples James Greener 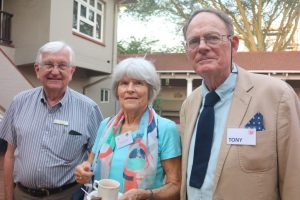 EXCURSION TO COEDMORE CASTLE AND THE MARY STAINBANK GALLERY

The SA National Society excursion to Coedmore on 17th May was a fascinating one made all the more enjoyable by the weather which blessed the area with rain the day before and provided warm sunshine for the member’s visit.

This historic home has essentially remained unchanged since the late 1800’s. A young Dering Stainbank, who was just 18 years old at the time, arrived in Durban aboard the Lady of the Lake in 1857.

His vision was to establish a farm and homestead on a site south of the Umhlatuzana River. Coedmore Castle is like a piece of England surrounded by African bush. We were interested to learn that Shaka’s warriors used this land as a resting place on return from their raids into Pondoland. Stones on which they sharpened their assegais are still to be seen. 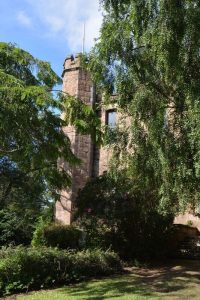 Jeff Leibrandt took the photo of Coedmore Castle Part hidden by the tranquil garden and its trees Inside the house, we admired the wood carved and steel pressed ceilings and the mural painting depicting the story of the Stainbank family. The original furnishings and household contents were in daily use until 1982 when Kenneth Stainbank and his wife both died.

After delicious tea and scones, we visited the gallery housed in a converted cattle shed. Mary Stainbank, one of Dering Stainbank’s seven children, was a sculptor of exceptional talent but her work was ahead of its time. Only years later was she credited with introducing the modern school of sculpture to South Africa. 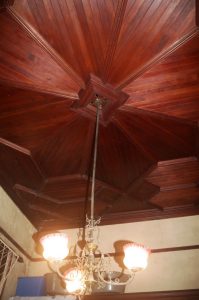 Coedmore Castle is now in desperate need of restoration but this will require a huge injection of funds. The roof leaks badly and so this is the first priority. 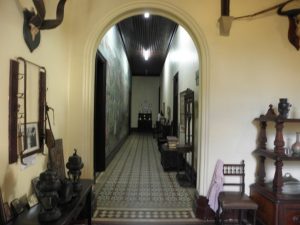 Jenny Birtwhistle, (pictured below), our guide and granddaughter of Kenneth Stainbank, explained some of the fund raising projects that have been undertaken. This nineteenth century home is certainly deserving of the support of heritage societies and our group left with the hope that this piece of Natal history will be preserved for future generations to enjoy. 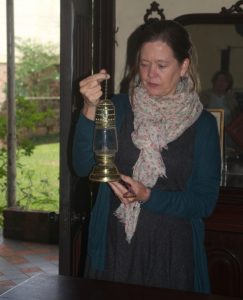 Just two of the many beautiful works of art enjoyed by members visiting this very special place. Long may it remain one of the outstanding attractions of eThekwini and be available for all its citizens to enjoy. Myra Boyes took both these photos