The Daphne Strutt Prize Winner for 2018

The April meeting brought considerable joy to a young lady called Anya Grobler; deservedly we should add because being top second year student in the Fashion Department at DUT for 2017 Anya had won the Society’s Daphne Strutt Prize for 2018.

As members know we are just about keeping ahead of finding Daphne Strutt’s definitive work to continue giving this as part of the prize; a prize which this year amounted to R1500.00 as well as the book. Myra Boyes with her superb bookseller contacts has managed to keep finding copies of the book and so it seemed only fair that Myra should present this year’s prize to Anya. 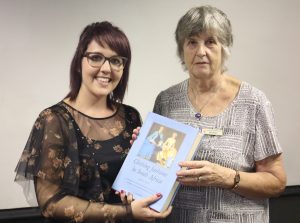 Anya then gave a short but pertinent address to members.

I am truly honoured to be receiving the Daphne Strutt award for 2018. This was definitely most unexpected!

From very young I was privileged to learn from my gran and mom who invested so much time in me. First they bought me the cutest little sewing machine (believe it or not but it was pink) and it stitched for real. They taught me pattern making and sewing so that I could design for my Barbie dolls. It definitely runs in the family from my great gran who was a designer herself down to me. Ever since then I have had this obsession with all things related to fashion.

When I was accepted to study at DUT, it was a dream come true, knowing that I had the chance of a lifetime to study at a highly rated institution with highly trained and experienced staff.

At DUT you become family and everyone you deal with encourages and supports you throughout your journey. We are constantly learning something new and each day comes with its own challenges but I believe it sets us up for great things when we are sent off into the world.

For just over 2 years I have learnt that fashion like the world around us is ever changing and we AS a global community are unified by this wonderful thing we called fashion. Taking everything that I have learned so far at DUT, I believe I will become a designer who can make a small change in our community by not just designing but by carefully considering who I am designing for and what type of message I would like to bring forth.

Fashion is not just clothes but it also tells a story whether it be personal or through global influences.

I am thankful to be surrounded by people that share my dream with me.

Thank you to everyone who I can count on day in and day out; may it be big or small, I truly appreciate you. 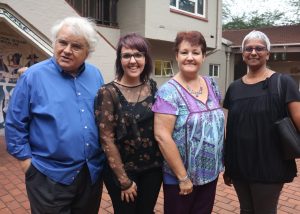 Members were not to know of the drama behind Franco’s presentation to the April meeting and the flurry of emails trying to trace his presentation which had disappeared into the ether a month or so back. To add to the drama it was this same presentation that hid itself last year forcing Franco to present his talk about the Chinese on the Rand Goldfields. Additionally Franco had been to Iran studying that countries awe inspiring architecture, which must provide the subject for a further talk, but did not make for great communications. In the end Franco started over, as the saying goes, and we were entertained to a new version of this talk.

On 28 June 1914 the heir to the Austro-Hungarian throne, Archduke Franz Ferdinand of Austria and his wife Sophie, Duchess of Hohenberg, were shot and killed by a Serbian student, Gavrilo Princip,  while travelling in an open motorcar through Sarajevo. This act unleashed a holocaust that lasted, on-and-off, for the next thirty-one years. By the time it ended in 1945 an estimated 103 million people worldwide had died as a direct result of these events.  About two-thirds of the casualties were civilian.

By Christmas 1914, as the broken bodies of sons, husbands and fathers began to come home, it became painfully clear that this conflict would not be easily won. Despite military censorship, stories about the hardships of trench warfare were beginning to filter back to the general public.

Death was turning out to be not so glorious after all.

To counter this adverse publicity and bolster public morale both sides instituted advertising campaigns that encompassed virtually every aspect of civilian and military life.

This then was the result – the need to Sell the Great War.

Using his wonderful collection of postcards from that era Franco illustrated his theme showing propaganda in various forms from the both Allies and the Axis. 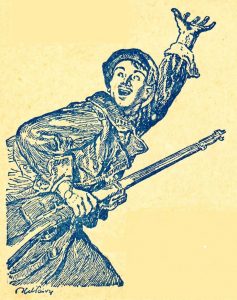 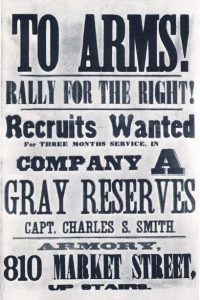 Initially men were eager to volunteer,

and their families were quite happy to speed them on their way as the card underneath with writing in German shows and the one from Britain proclaims a similar message. 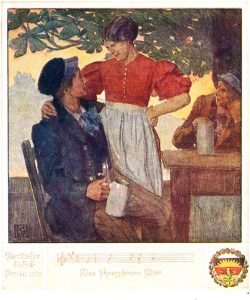 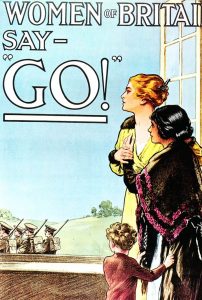 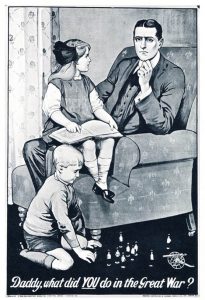 After all, this promised to be a great adventure which could well be all over by Christmas someone said.

All this was in the name of their Kings, their Kaisers, their Tsars, and their Sultans.

Everyone was very happy

The happiest of the lot were the banks and the arms manufacturers who supplied both sides with the funds and weapons necessary to run a proper war.

Before 1914, for example, the German steel producer Krupps of Essen was supplying weapons to 52 countries on both sides of the conflict.

The Victorians esteemed politeness and good manners meaning a further concern was that men might not show the aggression needed in war. In the event men fought well but children were dressed in military style outfits and literature particularly for the young showed heroes in many fields of conflict, designed to create the heroes of the future.

Postcard collecting had become a popular pastime so cards were produced by both sides; postcards which carried positive, patriotic messages like this one from Italy. 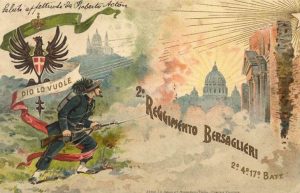 And people sent each other Christmas cards with a military theme as well as letters decorated with military labels. Look closely at this card with the Springbok one row above the right hand corner, and of great interest 100 years on English and Afrikaans visible when the image is enlarged. 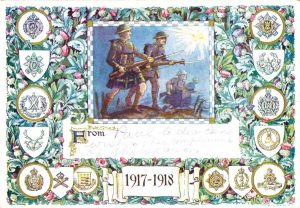 An excellent indication of the true quality of any presentation can be judged by the number of questions and these followed from around the audience at the end of Franco’s entertaining but also sobering talk. Let us never forget as Franco said at the outset, that between 1914 and the end of WW2 some 103 million people had died with probably two thirds of the civilians.

We thought it time to share a few pictures of participants at Society meetings so what better picture to start than our guest speaker’s wife Lesley Frescura who is making a point during the discussions. 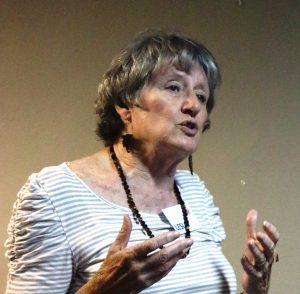 Two others on the committee who are true VIPs are the lady who is usually behind the lens, Sanabelle Ebrahim with our hard working treasurer Myra Boyes.