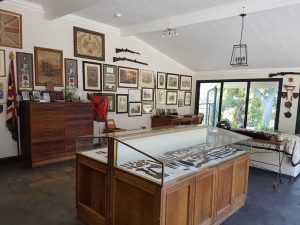 The back to back display cases in the photo form part of a new museum at Fugitives Drift Lodge. The cases are on permanent loan from the Society as they were surplus to requirements in Durban but with discreet signs will remind visitors of the role we play in history and heritage.

All the research papers of our much revered late member Ken Gillings have been given to Talana Museum which has agreed to create an archive in Ken’s memory. Archiving however requires substantial financial support so following an appeal from Pam McFadden – Museum Director at Talana, the committee has made its first ever contribution from the Development Fund – some R2000.00. Whilst other bodies associated with Ken have contributed similar amounts much more is needed to allow Talana to complete this mammoth task. If any of our members are able to add to this we urge you to do so via your Society. Our FNB bank details remain unchanged but for confirmation contact Myra Boyes meboyes@saol.com .

We recently received an appeal from the Van Riebeeck Society which plans to commemorate its upcoming centenary. The Van Riebeeck Society has contributed greatly to the history of South Africa via its many publications and now plans to publish a series of works by authors who were by no means fashionable 100 years ago. The Committee believes a small contribution is called for to support this project and agreed to provide R2000.00 from the Development Fund.

A third amount was also allocated to support a project much nearer home. Tourism Durban has created four heritage walks with which the Society wishes to be closely associated. It was agreed that we should sponsor the publication of the booklet for these with an amount of R5000.00. There will be an opportunity for members to participate in the pre-launch walks next month – details to follow. Of all the Provinces and Municipalities tourism in Durban is also creating more jobs and job opportunities than any other; this from a report in the Mercury published after the Committee made its award so we feel this supports local heritage in a very positive way.

It appears that many members are still unaware of the giant strides Hugh Bland has made in modernising and enhancing the Society’s website. New items, even if just a new link, are being added almost daily and the site is one that members can justifiably feel has truly raised not only our profile but our stature.

A website is there not just to publicise what we do and what we stand for but it also needs input and feedback from members. Please tell us if there is something else you would like to see added; if there is a link to another website that has similar interests to ours; are there headings which could be improved with additional material.

We have the ability to upload and play video so if you have clips on your mobile that are Society event or interest related please let us have copies which will add yet more member interest.

Lastly as members know, Hugh has a huge heritage and history photographic collection which can be seen at www.KZNPR.co.za so his latest improvement will be to add more photographic records and information to the Society’s site. This involves some tweaks to how items are organised for quick access as more and more is uploaded so again we encourage members to take advantage of these improvements. 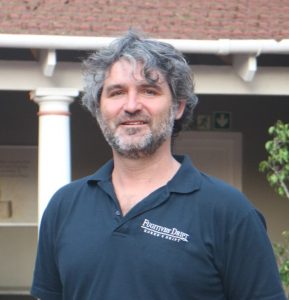 Steven Kotze was one of the Society’s two Killie Campbell Bursary Award winners in 2017 but members had heard little about his dissertation, and we might add many had no idea about the roads that Steve would follow during his research and dare we add at times that possibly included Steve too for some answers were at various with his expectations. At the end of his presentation questions flew back and forth occupying almost as much time as the presentation, surely confirmation of the fascinating subject this proved to be.

Steve summarised by outlining the areas examined, the questions to be asked and raised in his research, the resources he would examine and recommendations for the incorporation of these artefacts in future exhibitions and displays.

Gender, power and iron metallurgy in archives of African societies from the Phongola – Mzimkhulu region:

J.B. Wright & C. Hamilton (1989) “Tradition and transformations – the Phongolo-Mzimkhulu region in the late 18th and early 19th centuries” provided material about the subject. 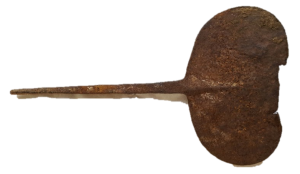 ** Swidden agriculture, also known as shifting cultivation, refers to a technique of rotational farming in which land is cleared for cultivation (normally by fire) and then left to regenerate after a few years.

We learned that the majority of hoes in museum collections are archaeological artefacts.

Using material, both data and illustrations from Maggs, T. ‘Metalwork from Iron Age hoards as a record of metal production in the Natal region’ published in the South African Archaeological Bulletin (volume 46, number 154, 1991), Steve was able to pursue his line of research.

Notwithstanding “the emphasis of the industry […] on the ploughshare rather than the sword, as most iron smelted in this region was forged into hoes rather than weapons” (Maggs 1991: 131; 136) 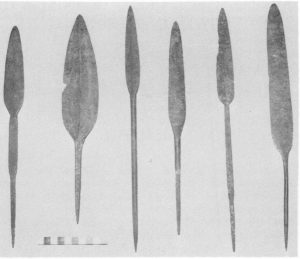 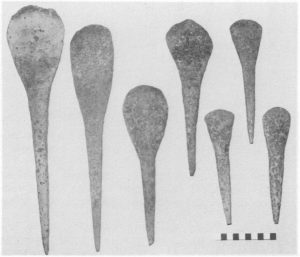 Continuing his theme of The concealed contribution of women in the agricultural economy of the PMR Steve quoted from a 1990 work by Nyembezi:

Either origin is associated with agricultural work done by women:

“I say women because all agricultural work was done by them in old Zulu society. When one was tired after a day’s hard toil, the hoe might be a big burden on the back. The proverb thus indicates an onerous obligation, when one feels that the responsibility is too great, that it weighs too heavily on his [sic] shoulders” (Nyembezi 1990: 113)

Using a series of illustrations from museum and other collections, early books and other sources we saw the emphasis on military artefacts.

Domestic life in African homesteads of this region is mostly only known in generalised descriptions.

Most people are unfamiliar with the most important metal artefact of this domestic history: field hoes.

These are not widely collected or represented in public and private museums although other types of domestic artefacts are collected such as: 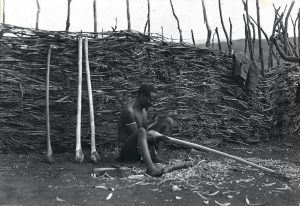 Historical processes linked to hoes include:

One exciting discovery made during his research was that of an enthusiastic collector of hoes,
Sihle Bobby Radebe.

In conclusion it had been discovered that museum exhibits and displays tend to only display hoes as examples of Iron Age metallurgy although this research has created opportunities to improve this situation.

Page back to the cover photograph of this newsletter and look in the front corner nearest to you for there proudly displayed in the Fugitives Drift Museum case are hoes which form an important part of its collection.

Hardy Wilson
With apologies to our presenter for much that was lost in précising this splendid research. 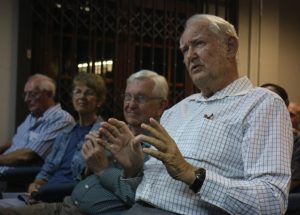 Longtime member Robin Ralfe is ‘talking with his hands’ in this picture that says much. It was certainly keeping the attention of Ian Smith as well as others around them.

Photos above and below
Sanabelle Ebrahim 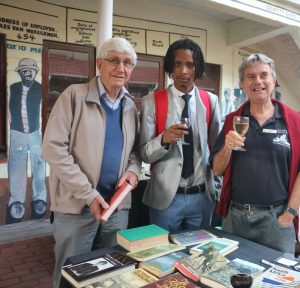 Visitors are always welcome so when Dinkie Manjati walked into KwaMuhle as the museum closed his disappointment was turned into joy when we invited him to enjoy Steven Kotze’s presentation and the company of members for an hour or two.

David Hughes has been doing a great job manning the book sales table, although they look as though they’re celebrating not selling, except John Cooke who looks as though he’s celebrating the capture of another great work.