Founded in Pietermaritzburg in 1851, The Natal Society has served the scientific and literary interests of the community of KwaZulu-Natal, South Africa, since its inception. It founded the Natal Museum (now a state-supported national institution) and the Natal Society Library which became the largest privately-owned public library system in the country (until transferred to the city’s Msunduzi Municipality in 2004). 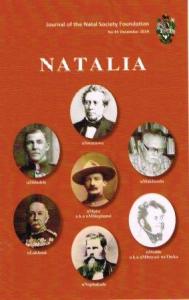 Today the Natal Society Foundation, a registered non-profit organisation, continues the original aims of the Society in “the general encouragement of habits of study, investigation and research” by publishing Natalia, maintaining a specialist Victoriana and Africana research library, and providing funding to support scholarship, research and publications.

Natalia was established by the late Professor Colin Webb in 1971, who was its first editor.  Natalia 44 has just appeared. The entire Natalia corpus has been digitised and is freely available on the Internet at www.natalia.org.za  Copies of the current edition and many back issues may be purchased from: