An extremely well attended evening was hosted by DLI on 2 August, with the guest speaker being Major General Duncan Capps, who was on holiday to visit his family in KZN.

The evening started off with a welcome by Colonel Derek Moe, Chairman of the DLI HQ Board. A welcome was made by SANS President Robert King accompanied by pre-drinks and snacks, after which the guests moved to room 4 with a Piper Fuller leading the way.

After an introduction by Graeme Fuller, the main talk was given by Major General Duncan Capps, who after 35 years service was able to give some insight into how the British Military has evolved and with particular reference to the changing face of logistics required in different operational sectors.

Of particular interest were  the challenges of logistics in Afganistan. 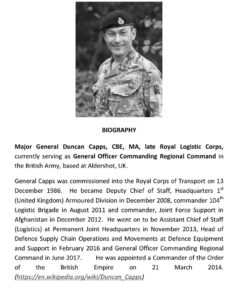 After the speech, a vote of thanks was given by Ian Smith, which was followed by a performance of the Durban Caledonian Society Pipe Band (formerly 1 Medical Battalion Regimental Association Pipe Band), in the Green Jacket Room.

A big thank you to the DLI Management and Staff for their support for this event.

Below are images taken on the evening: 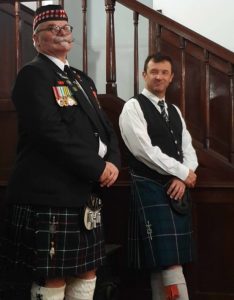