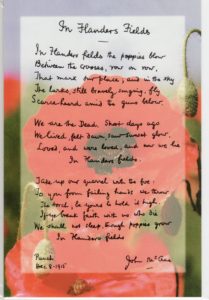 John McCrea’s poem, ‘In Flanders Fields” undoubtedly is the most well remembered poem emerging from WWI and hauntingly reminds us of why we remember the tragedy of this brutal war.

The S.A. National Society, by way of publishing this poem, wishes to remember and pay tribute to the supreme sacrifice made by all of the armed forces and support services.

We received the following poem from Gillian v.d. Heijden who sent us the poem below that was written by her late mother Frances Emily Katz, at the time of the Versailles Peace Treaty of 1918.

She has also added an interesting footnote about her brother who went on to become a strong anti war activist.

My brother (son of F.E. Katz born Manchester 1935)  Kendrew Lascelles (matriarchal family name) is  renowned for his anti-War poem THE BOX which was sung by John Denver of Denver Colorado. Lascelles was then playwright for Denver Theatre.1970-73.  The poem sold four million copies and helped to topple the Nixon Vietnam war machine.   The statue of John Denver stands as a monument on the mountain above the City of Denver Colorado;  beneath the statue is a plaque of Lascelles’ poem The Box. Kendrew Lascelles is found on You Tube under his name and the title THE BOX;  John Denver is simultaneously found