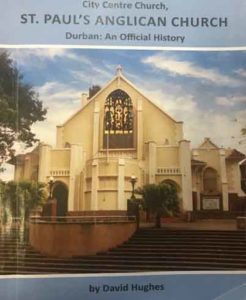 Attached are images supplied by Sanabelle Ebrahim. of attendees enjoying the evening at Ikes Book Shop.

This history of St. Paul’s Church in the Durban CBD draws heavily upon the previously unpublished church history of Reverend Jimmy Draper, especially the early days. Reverend Draper was rector at St. Paul’s 1975 to 1987. David Hughes has been a member of the St. Paul’s congregation for around twenty four years and currently serves as a Lay Minister. He also serves on the committee of the Durban branch of the Mission to Seafarers. David is a specialist maritime and travel writer, author of a number of passenger liner publications and writes from home as a freelance travel journalist. Durban born and bred, David’s apartment overlooks the harbour and Maritime Museum and is just down the road from St. Paul’s.

Anglicans have been worshiping at St. Paul’s since 1854. The old church was consecrated by Bishop Gray of Cape Town in 1864.

St. Paul’s humble beginnings were in the shop of Mr.L.E.Mesham in Aliwal Street where the shop also doubled-up as a classroom.

In 1850 on a visit to Durban Bishop Gray discussed the building of a church and a site on the North Eastern side of Market Square was chosen and the foundation stone was laid on the 17th of March 1853.

(est. 1910) in 1912 ; Reverend E.Wade , 1952 priest and father of tennis star Virginia Wade ; Reverend Allen Wease Gardiner (son of of Captain Allen Gardiner after whom Gardiner Street was named ; Bishop John Colenso after whom the town of Colenso in northern KZN is named . St.Paul’s was the first building in Durban to have electric lights late in 1889 – likewise Adams Booksellers round the corner in West Street was among the first shops to have electric lights around the same time. In 1859 the first railway line built and run in Southern Africa, ran from the Point docks to the open platform built near the northern side of St. Paul’s.

We hope you can join us at 6.00 pm on Thursday 31 January at Ike’s Books to hear David Hughes and Anglican Clergy speak on a book which adds to the canon of literature covering the micro-histories of Durban. St. Paul’s Anglican Church: an official history is a slim 84-page booklet with several photographs which will take its place on the shelves of public and private libraries. Feel free to share the invitation. Further enquiries can be directed to Cedric Sissing of Adams Books on 082 873 2702 or cedricatadams@gmail.com