Letter from the Chair

The Society is working to improve its website where members and visitors will soon find more information, more about heritage and more information about its activities. Hopefully visitors to the site will find it easier to navigate and find what they are searching out.

As a first step from this month the newsletter will be exactly that with news reflecting what happened during the past month. The program will also be exactly that so members can see the event or events planned for the following month.

Your Society has a healthy data base of people interested in heritage but this is divided so events which are exclusively for members can be sent exclusively to paid up members. We want and need to encourage visitors so the Newsletter will continue to be sent to everyone whilst the program will also go to everyone if it is an open event.

We hope that all of us will benefit from this change and the Society will continue to grow as a result but do remember it is your Society and member feedback is welcomed. Use either of the email addresses below to talk to your committee.

The ICC was the venue for the most stimulating and worthwhile parallel conferences from Tuesday to Thursday 13 – 15 February. Several members from the Society, most being committee or past committee members were there and having to make hard choices as to which sessions should take priority. Adrian Rowe from Highway Heritage, who fortuitously had learned of the conference (and Manager of the Inchanga Railway Museum), along with another HH member, and Society members working as a team managed to learn a great deal.

All credit to the organisers and the KZN Department of Arts, Culture, Sport and Recreation for putting this together and how appropriate that it should precede Ros Devereux from Amafa, who is our guest speaker in March.

Prof M Ngoepe is a leading academic in the field of archiving who lead us through the first session skilfully and entertainingly. Doctrines and statements which were of great moment and clearly understood were to be followed either by Amen or Hallelujah. His message was indeed clear and at times this revivalist presentation had his audience in full song.

We followed the history of Archiving in South Africa from the time of the Dutch, which was understandably somewhat sketchy; and the change which followed a British Act of Parliament that caused the Cape to improve its records; through the final years before 1994 when many records were destroyed; to the present day.

We went on to learn that Archiving as taught in SA has until recently had just four modules but from next year will have sixteen. This will hopefully see the art and practice of archiving raised to a higher level of professionalism and understanding and therefore value to everyone.

The maintenance of archives is a Provincial responsibility and whilst KZN may be a leader in this field there is much to be done to improve and enable people to access our archived records.
The LLAM Conference was advertised as an opportunity for Societies and Institutions to get to know of each other’s activities.
What better way to do this than over coffee and cake – appropriately as this was Valentine’s – with red cupcakes.
Photo shows Friends of the Society being:
Nellie Somers from Killie Campbell Collections, Adrian Rowe wearing his Highway Heritage Hat, (albeit invisible), Kathrine Fenton-May whose camera took the picture and Hardy Wilson. 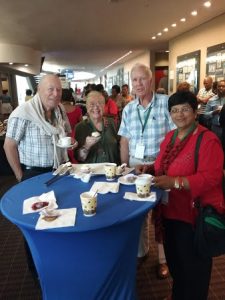 Steve Kotze lead a Museum Services session entitled, History in Plain Sight – using digital platforms to promote Liberation Heritage in eThekwini Municipality and we should consider asking Steve to talk on this subject later in the year. Another Museum Services session that would have appealed was called, The current state of textile collections in KZN.

The presentation quality and subject relevance was maintained through the last day. The presentation by Reinhardt Hartzenberg entitled, The Heritage Management System was superb. KZN has development a Metadata record system which appears second to none. It’s a system which Museums and organisations holding all types of exhibition material including photographs can use to store and share detailed records; records which others can access thus enabling museums to share items, researchers to find information and of course have a data base that is of immense value.

Attendees have been promised copies of most of the presentations and without doubt you can expect member opportunities to follow. The papers will hopefully be shared as will opportunities for member participation.

We love to hear from those to whom we have awarded prizes or bursaries so read on:

Dear Hardy I hope this message finds you well in the New Year, I wanted to reach out and tell you and the SANS members of my plans for this year which are to continue with my full-time studies and pursue my BTech/Honours. And with the momentum I gained from the award I received from the SANS I was able to stay committed to my final year studies last year and I am graduating this April. I just wanted to say thank you for being a part of my journey. Please send my regards to all the members. Best wishes Zane Ngwenya
Page 3 of 5
REPORT BACK: Mountains Passes and Poorts of SA by Patrick Coyne

Patrick’s presentation contained something for all and was received with much enthusiasm by everyone at this once again large turnout meeting. We started with a Classic Car; travelled the length and breadth of the land or should that be up and down the passes and through the poorts of SA; saw flowers on the brink of extinction; and struggled over roads to Rhodes which should never be contemplated by anyone not in a rugged 4 x 4. We also learned much about the geology of the many areas visited.

However Patrick and his wife Helen are obviously imbued with a tough pioneer spirit and thankfully a car that coped equally well with tough.

To quote our speaker, “When my wife and I told friends what we intended to do, their immediate reaction was to advise that our first stop should be an AA recommended psychiatrist. But I had faith in the car, and it was vindicated”. Then to quote many who have known and used what is tantamount to a Fieldguide to the Passes, “It is an essential part of all our explorations and we would not be without it”. So we can all be glad that Patrick took the trouble to research and publish this invaluable work.

Our speaker explained that we had insufficient time to deal with all 50 passes and we soon realised why as he showered us with fascinating information about more than half this number.

Our first poort was Meiringspoort where we looked at a picture of a Cape cart taken in 1885. This poort is indelibly linked with the two Bains; Andrew Geddes Bain and his son, Thomas Bain. The poort was opened in 1858. TV Bulpin said in his book, ‘Discovering Southern Africa’ The Poort is romantically lovely, grand and majestic, with brilliantly coloured sedimentary rocks.

Then we looked at Seven Weeks Poort which has been little changed since built in 1862. The originating engineer was Adam de Smidt. Seven Weeks Poort is where the rare Protea aristata was first found in 1928. It was then not seen for 25 years until 1953 when a clump of 5 was a found near road. To see these flowers, if you’re lucky – visit the poort between March and May.

Onto KwaZulu-Natal and our own Sani Pass which is 2874m high (9426 feet) and South Africa’s highest pass. To beer lovers and hungry travellers it fittingly also has the highest pub in Africa sitting it would seem at the top of the World. .

Two wheel drive vehicles are rightly banned from negotiating this ‘road’ so taking the Rover up Sani Pass was not allowed and they had to go in a Land Rover. To prove Sani Pass is dangerous we saw pictures of a wrecked truck that careered off the road and down the mountainside. With the plan not in only place but now actually started tarring will surely mean it becomes a ‘highway’ in the literal sense.

Sani has a great history so two books are recommended: Sani Pass — Riding the Dragon by David Alexander & The Saga of Sani Pass and Mokhotlong by Michael Clark. Or you can read its history in Patrick’s book.

KwaZulu-Natalian’s sometimes forget the Free State side of the Berg so it was a fitting reminder that Witzieshoek has a picnic site at 2286m (7500 feet) with the Sentinel 3165m (10383feet) in the background. This is presently the highest tarred road in SA and possibly in Africa. No two sources agree on the altitudes of these passes but we used an aircraft altimeter – and later compared results with those in Government survey maps. From the parking place it’s a two hour walk to the famous (notorious) chain ladder leading up to the plateau overlooking Mont-aux-Sources; this being built by Walter Coventry in 1924. TV Bulpin wrote that it was ‘one of the most stunning scenic experiences in South Africa’

Page 5 of 5
Back to the Western Cape and Sir Lowry’s Pass which is the pass on stilts. In my book I have told its long history. But briefly, it was first crossed in 1655 by an army man – Corporal Muller. “In 1828 the Governor of the Cape Colony, Sir Lowry Cole decided a proper road was feasible. Without informing the British Government he collected some money and told engineer Charles Michell to proceed. The first pass opened 1830. The Colonial Office in London was not amused when news of this fait accompli reached them. They threatened to dock the cost (3000 pounds) from his salary. There was a public outcry, so the Colonial Office relented and paid up. The pass was unchanged for 126 years. The latest improvements, including the great concrete viaduct, were completed in 1983. From the top of the pass one can look over Strand and False Bay with Table Mountain in the distance. There is a plaque giving the history of the pass placed when it was made a National Monument.

You notice the Bains repeatedly appear in the story with the next being Bain’s Kloof. Dacres Pulpit is a rock overhand in one of the oldest and best known passes in SA. It was first explored by Andrew Geddes Bain (father of Thomas). Construction began in 1849 with opening in 1853. Before the opening Bain was asked to speak. He replied, ‘I would rather make another Bain’s Poort (its original name) than make a speech. I am nothing but a common highwayman and only accustomed to blazing and blasting.’