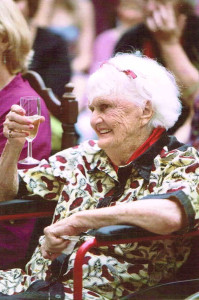 On March 15th 2015, Barbara Tyrrell turned 103 years old and there is a need to celebrate her remarkable life-work, already recognized by the South African former President Kgalema Motlanthe with the Order of Ikhamanga Silver(OIS) in 2008. Barbara Tyrrell remained the friend of Campbell Collections after her friend Dr Killie Campbell died in September 1965.

Barbara Tyrrell was born on the 15th March 1912, in Durban, KwaZulu-Natal but grew up in Eshowe, Pietermaritzburg and Richmond speaking fluent Zulu at the insistence of her father, a court-interpreter. She is the only surviving close friend of Dr Killie Campbell. Her grandfather Frederick Fynney, was interpreter to the Zulu King Cetshwayo kaMpande and accompanied the monarch on his visit to Queen Victoria in 1882 after the Anglo-Zulu War of 1879.

She nurtured this inherited love and fascination for African history and culture and after training as an artist at the Natal Technical College (which was founded by the Campbell family and is now Durban University of Technology) in 1930-3. She embarked on her recording of African costume in 1944, as her close friend Killie Campbell commissioned her on this mission documenting African costumes that were in danger extinction for future generations. 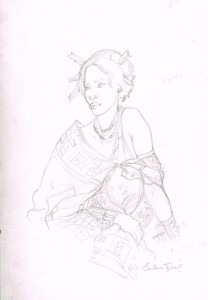 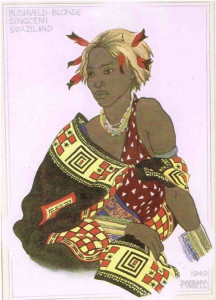 Original field-sketch of a Swazi woman and the final watercolour
(Campbell Collections, UKZN)

Barbara Tyrrell is one of the artists who contributed immensely to South African art especially in preserving indigenous knowledge systems (IKS) through her recording and writing on all the southern African cultures. Her consistent respect for and interest in African peoples’ customs and dress depicted in her artworks often resulted in her being ostracized by her white counter-parts in officially sanctioned mainstream art-schools in the Apartheid era which chose to classify her work as merely ethnographic recordings. Only Dr. Killie Campbell recognized the huge contribution of Tyrrell’s work and ensured its collection and preservation for future generations in what was a fast modernizing world. Dr Killie Campbell was one of the leaders of Black Sash in Natal and dedicated to conserving African and especially Zulu history and culture in the days of colonialism and apartheid. In 2008 Barbara Tyrrell’s work was given its due recognition when she was awarded the Order of Ikhamanga Silver(OIS). Hence, it is also appropriate to have Tyrrell’s work celebrated along with the ANC centenary celebrations.

Barbara Tyrrell’s work has contributed vastly in making Campbell Collections, UKZN one of the major centres of research on IKS and African history. Campbell Collection, UKZN dedicated her work to form its permanent exhibition. In 2013 she donated all her material which includes her correspondence, scrap books, photographs, certificates, books and other valuable material to Campbell Collections, UKZN. Her heroic and informative works will remain relevant to researchers and the public for the next coming centuries.

The Public and UKZN community is invited to enrich themselves by visiting Campbell Collections, UKZN at 229 Gladys Mazibuko Road, Durban, 4001. 031 207 3432 where there is generally off street parking.

Use the link to download a pdf version of this News Brief: SANS News Brief – 013 – Barbara Tyrrell Celebrates her 103rd Birthday