For the August Program Charles wrote saying, this unusual talk illustrates the Good, the Bad and the Bizarre of historical Northern India – a most fascinating part of the country, often frenetic, at times even funny, but also filthy. With the same quirky humour as in his other immensely popular talks, Charles Botha shows photos that most tourists would never think of taking – no holy cows here! 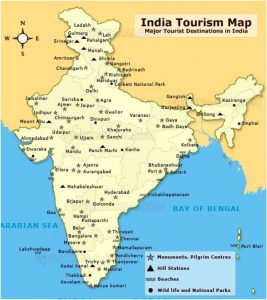 This is definitely not a standard travelogue and is completely different from any such presentation you may have seen before. But, be warned, not all the pictures are pretty, so be prepared for some shocks.

With that to tempt members and friends little wonder that more than 60 people arrived to be entertained, even shocked, by Charles, well supported we might add by wife Prof Julia Botha, as he told and showed us a little about this fascinating land.

It’s always good to get a feel for where one is so we started with a map of the sub-continent.

The Botha’s travelled around part of Northern India so the next map included some indication of the economics of that area too. This was all excellent background material.

Charles added, that because Julia and I have so many SA Indian friends, the first time we went to India I thought that we would be very familiar with the people there. But I couldn’t have been more wrong. That was like thinking because you know Afrikaners; you would be familiar with the Dutch or Germans in Europe. Also, please note that when I refer to Indians, that definitely excludes South Africans of Indian origin. 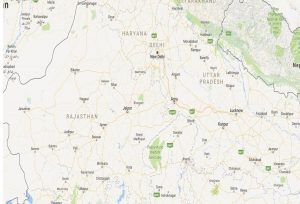 For starters, many of the people in that part of India speak no language other than Hindi, while others can speak some “Hinglish” which is often difficult to understand. They do of course have 22 official languages, compared to our 11.

And India is one of the few countries where people regularly wear traditional clothing, which creates attractive colours not found elsewhere.

The colourful clothing is not worn for tourists, or even on special occasions only, but here we see a trench digger, with her child sitting on the sand. Your clothing also indicates your social rung. 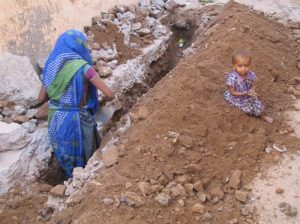 We looked at the great variety of animals which freely roamed the streets; not just the Sacred Cow but monkeys, dogs, rats, pigs and goats. The Asian Elephant has been domesticated and used for millennia as transport, as a forest worker hauling timber and as a fearsome engine of war.

The spikes on this massive door are there to deter the elephant from battering it down in a siege. 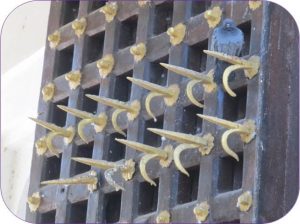 One immediate impression is of huge crowds graphically illustrating the enormous human population. Another impression is the sheer unbelievable mass of litter; litter which is shared by many different animals and all too often to their detriment. 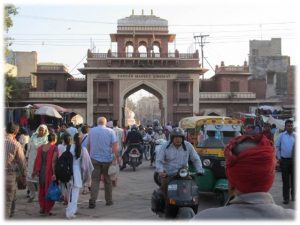 But another impression is the enormous volume of published works; all to most visitors available at bargain basement prices and covering the widest range of interests from nature to philosophy. And for any bibliophile always ensuring the luggage flying home would be pushing the bounds of one’s allowance. 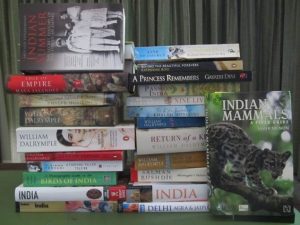 The wildlife of India is under immense pressure from the human population with the Griffon vulture brought to the edge of extinction because of the extensive use of the now banned anti-inflammatory drugs for cows. But equally wildlife often thrives alongside man in spite of the density of the human population. India is botanically rich but also threatened by alien plants over big areas.

This land of contrasts is a land with a towering history; a land of great palaces and temples as well as intrigue and family treachery. It has wondrous historical treasures and many World Heritage Sites. 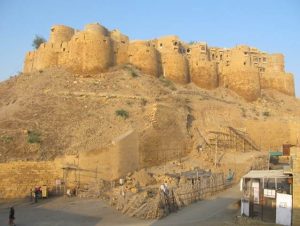 The ancient desert fort at Jaisalmer is packed with people although the population has expanded over the land around the area. 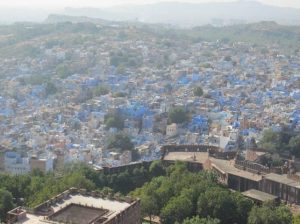 Jodhpur is known as the Blue City, the colour having once been embedded in the plaster because of the chemicals present in the mix, but perhaps better known to us because of the riding breeches invented by Pradap Singh and popularised following a visit to Queen Victoria’s Diamond Jubilee in 1887. The photo by the way was taken from the Fort high on the hill overlooking the town.

Jaipur is another beautiful city with a huge history.

In Jaipur is the amazing Jantar Mantar. 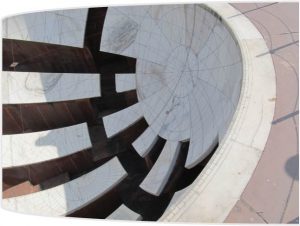 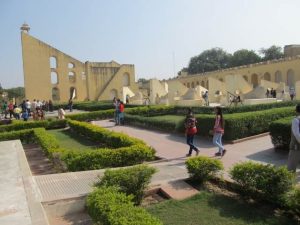 For example, this giant sundial calculates time accurately by following the solar cycle. And this sunken hemisphere, maps out the heavens.

We are indebted to Charles Botha for this insightful view of this amazing country. We looked at 170 slides containing myriad illustrations in Charles’ one hour presentation so thank you and Julia for this altogether fascinating hour. Charles promised a return visit to look at some of their other destinations and we can guarantee that Angie St George will have them back on the program hopefully soon.

Some days after the meeting and as the result of a question from Helen Parry about Zoroastrianism Charles sent the following link which members may like to follow: –