Committee member, Angie St George spearheaded a visit to the historical West Street Cemetery last week. This cemetery  has many of the graves of citizens and officials who built not only the City but also contributed to the development of the Colony. Examples of some of those  persons were, George Cato, Fatima Meer, the Greenacre family, and surveyor William Stanger.

Another well known citizen was Thomas Baines, artist, who died in Durban and is buried in this cemetery. Historian Udo Aveweg, provided the Society with his well researched paper on Thomas Baines. The link below will give you a comprehensive biography of this talented Pioneer. 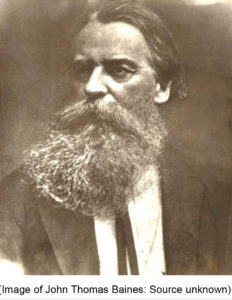 The S.A. National Society recently toured the West Street Cemetery and the attached PDF has  a summary of his illustrious life

Below are the notes of member Arthur Gammage which he has kindly made available to the Society:

WEST STREET CEMETERY VISIT : Notes from Arthur Gammage and images of the cemetery. Please click on link below to access images of the Cemetery.

“All honour to the sentiment that lingers around the memory of the departed, and to the natural selection by the civilian settlers of a delightfully cool and shady nook in the dense virgin forest on the outskirts of the township, for their last resting place. Here on the edge of the Western Vlei the graves were out of sight and not likely to be disturbed. The first grave was followed, as near as conveniently could be for the growing trees, by the second, and as fresh space was demanded; graves were dug by willing hands somewhere near the previous clearing, but without special regard for uniformity.

The Rev. Mr. Lloyd induced the Governor to sanction the reservation of a “God’s Acre” at the West End of the town enclosing the graves already there, as a General Cemetery. Inspected and recommended by Dr. Stanger (the first Surveyor-General), an area of 100 yards square was surveyed, and title issued to the Bishop of Cape Town by deed dated 12th June, 1850.

The Rev. WHC Lloyd, bland and impecunious, had to raise funds and encourage the public to interest themselves in enclosing and laying out the ground. The convicts made a ditch and sod bank, while the gates were contributed by a general parish levy of wood, labour, hinges, fastenings and paint. The gates not being for everyday use, a stile of bushwood was erected at its side. The entrance to the Burying Ground was almost in a direct line with Pine Terrace (later Pine Street). Dr Stanger was himself buried here; his monument is placed fronting the main entrance and pathway of that period.”

The road on the town side was named Cemetery Lane (later Cathedral Road). After 1875, the extension of the Durban to Point Railway southwards ran parallel to this road to cross over West Street. In 1893 the line was deviated northwards to the far side of the cemetery adjacent to Brook Street, and the vacant strip of land utilised after 1900 for the 2-3 storey buildings which follow the curve of the railway route.

Why was the cemetery block set at an angle to the city grid? And why a different angle from the Ordnance Land block to the north around the Camp or Old Fort?

It also seems strange that the south corner had to be cut off for the extension of West Street. Early maps show that the main road from the south and west entered Smith Street which was the original “high street”. And the first route to the Berea Ridge was from Field Street, before Old Dutch/Berea Road to Tollgate was added.

The grant of land, 300 feet square, to the Church of England was followed by the Roman Catholic block to the northeast and the Wesleyan Church block to the northwest, i.e. the centre of the larger square. Then came the Church of England no. 2 site occupying the south corner. So the church cemeteries make up a T-shape, the remainder being municipal property, with a separate drive-in entrance off Theatre Lane, although the internal borders are not obvious.

An 1882 map shows areas allocated for Indian and African (using the k word) burials on the north east side. In due course, areas towards the north were allocated for Jewish and Muslim graves, with a single row of Parsee graves at the extreme northern corner, with names such as Rustomjee, Randeree and Ginwala.

To the Muslim community, the cemetery has been better known as Brook Street, containing the landmark Badsha Peer Shrine. The pedestrianised street adjacent to Berea Road Station is the venue of an annual festival.

In their corner of the cemetery, the Catholic Church built the Emmanuel Cathedral, designed by Street-Wilson & Paton, 1902/3, as well as the presbytery and the little Father Sabon’s Chapel.

The Anglican funeral Chapel, known as the Chapel of the Resurrection was designed by architects Powers and Powers in 1939. An undated photo of the West Street entrance gate shows a possible earlier version. The roof and interior panelling were severely damaged by fire reportedly due to a lightning strike c2005. Protracted discussions and correspondence between the church and the city have resulted in agreement in principle for restoration and ideas for reuse, but no action programme as yet. St Paul’s priority recently has been reroofing of the mother church. A stock of Broseley tiles has been purchased and stored on site for the Chapel roof.

The central chapel located just to the south of the Wesleyan Methodist block was originally rectangular in plan with gable ended roof. Additions have produced the T-shaped building now used by the Cemetery staff as offices, including records of the graves and a maintenance equipment store.

Opposite the main entrance stairway is the shrine of Hazrath Badsha Peer, one of South Africa’s most revered Islamic saints. He arrived in Durban with the first Indian indentured labourers in 1860. A year after Badsha Peer’s death, Soofie Saheb erected a shelter over his grave so that people could receive blessings and pay their respects in comfort. This domed structure has been considerably embellished over the past 25 years.

The construction of the Western Freeway “spurs” during the 1970s consumed most of the Catholic burial ground, as well as smaller corners of the Anglican and general cemeteries. The late Geoff Boden spoke about the process of contacting families and exhuming remains for reburial. The remaining Cathedral grounds became a separate enclave.

Some noted persons interred in the West Street Cemetery