Celebration of the 110th Anniversary of the Society

The Society is extremely proud that Hugh Bland is a member. Between 2012 and 2017 Hugh has diligently compiled an amazing and hugely underrated photographic record of significant historical, heritage and architectural places in Kwa-Zulu Natal. In his own words, ‘The site is the most comprehensive image-based record of KwaZulu-Natal.’ There are records of sports clubs, schools, old Natal farms, Zulu War, Anglo-Boer War, KZN towns and villages, street scenes, cemeteries, bridges, military monuments, heritage sites and tourist locations to name just some of the views to be found.

Hugh opened his address with a quotation from the Duke of Edinburgh;

“We cannot allow our cultural heritage to be destroyed in the name of progress – no generation can exist for the present alone. It is conditioned by the past as much as it conditions the future ……we will be failing in our duties as trustees for future generations if we deny them a record of our history”.

The conservation of our cultural heritage is of vital importance, as a nation’s identity stems from its past.

His motivation for the project was summarised as;

At this juncture we would like to re-iterate that whilst Hugh Bland is generous and allows many people to use his images they are his copyright so all the photos used in this newsletter (and on the Society website) are used with Hugh’s express permission.

In order to garner and process so many images a sound Modus Operandi and its implementation is essential. It involves;

The site is self-funded which has meant freedom from unwanted interference; furthermore the site is non-commercial. 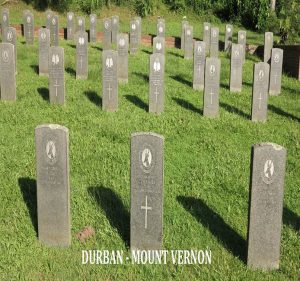 Let’s look at some vital statistics;

We were given several excellent tips and learned about a few of the difficulties Hugh faced including difficult locations and the odd difficult person, the worst being someone with something to hide.

It is both sad and hard to understand that sites which should be a priority and centre of focus are too often apparently of no priority to those in authority. This monument in Richmond is neglected and in decay.

Hugh also pointed out that some of his pictures are now the only record for all too many of the early buildings have been completely destroyed in the past year or so. What a sad reflection of what we as a people fail to stop.

In order to access the site please click this link http://kznpr.co.za/ ; and for images click ‘Gallery’. Then click to get the drop down albums. Click on the albums to see the different galleries. The separate galleries in turn have enlargeable thumbnails with an image description.

Nineteen members and friends, including some from Highway Heritage, enjoyed a truly social yet history packed mid-week break at The Oaks at Byrne. We take our hats off to organiser Angela St George for making all the arrangements with the hotel, arranging an excellent local guide, and juggling her program at the last minute to work around the weather.

On entering Richmond via Shepstone Street and turning into Victoria Street one comes across a small cottage that was once the Presbyterian manse and which now houses the Richmond Museum. On the 15 August 2017 nineteen members of the S A National Society met on the steps of this museum to explore the history of the Byrne Valley and its intrepid settler community.

The museum is a treasure trove for the Byrne settler enthusiast! Here one finds Ellen McLeod’s needlework box, the table made from wood of the wrecked Minerva and the bed carved by William Fayers.

The curator, Odette, enthusiastically showed us round this well-kept, clearly laid out museum which now also includes displays of Bhaca, Zulu and Indian artefacts.

For the Society group it was then on to The Oaks Hotel, once home to Richard and Bessie Hosking. This comfortable country hotel was to be our home for the next two nights.

The same afternoon we were off to explore the Baynesfield Estate. Initially known as Nel’s Rust, Baynesfield is today a working farm and museum. The recently restored Victorian home, which contains some furniture brought from Macrorie House, is surrounded by a pretty garden of bright poppies, clivias and magnificent old trees. Roxanne and Delaine gave an excellent guided tour of the dairy museum, the hobbies centre and wireless museum and the historic house itself.

Gerald Buttigieg was our guide the following day. His talk was given in the 1923 church of St Mary Magdalene which stands on the site of the original Byrne church. Gerald first put the arrival of the Byrne settlers into perspective by painting a picture of events leading up to their arrival in 1849 and setting this against the depression and Industrial Revolution in England. Gerald then pointed out the graves of the settlers, who against all odds, remained in the Byrne Valley.

Gerald Buttigieg is also the author of a booklet entitled “A Short History of the Village of Byrne”. In the afternoon he met us at the Market Square and outlined the history of what was originally called Byrnetown and which existed only on maps. The village was developed in the 1970’s using the original 1850 John Moreland subdivisions – hence present day street names Pall Mall, Joseph and Charles Street. Gerald’s interest in the importance of recording local history came across strongly and we were all grateful he could share his passion with us.

Use this link to read more about Gerald Buttigieg on Facts About Durban http://www.fad.co.za/resources/gerald-buttigieg-profile.php

On our last evening, the group enjoyed a fascinating talk by Robin Ralfe whose ancestors were neighbours of the McLeod family in the 1850’s. Robin’s talk was illustrated with extracts from his grandfather’s journals and with excerpts from “Dear Louisa” (Dr Ruth Gordon’s book of letters written by Ellen McLeod).This informative, interesting talk rounded off our visit to the Byrne Valley. As the weather closed in and mist and rain descended, we were made more appreciative of the hard struggle the early settlers had in battling, with few comforts, against all the elements!  A cosy fire in a warm pub made us grateful to be 21st century visitors to the Byrne Valley.

Many people recall that food tasted that much better when cooked on a ‘range’ like the one below. Further the cook would probably appreciate the warmth in a Midlands kitchen in winter – but not too sure about summertime. The ironing might have needed more skill than it does today though. 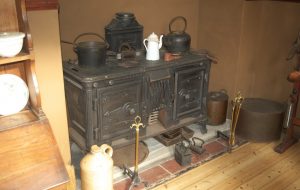 Joseph Baynes was far ahead of his time and introduced innovations to Natal and ultimately South Africa that were of great benefit to everyone. He employed joined up systems that were probably only limited by the size of the market available at the time. Like many successful men he then used his wealth to help others.

Today we can be thankful that in spite of all the Byrne Scheme’s shortcomings there are still so many outstanding descendants of those settlers still making a great contribution to our country more than a century and a half later.

With appreciative thanks to both Graham Allan and Hugh Glen for providing a really useful selection of photos of the outing. And our thanks to Gerald Buttigieg for his detailed explanations at both Byrne and Richmond for without his input the all-important detail would have been lacking. His Short History of the Village of Byrne makes fascinating reading.

Update to the Stage Coach Story

Elrica Henning, who is Head of Research, Information (Library) and Collections at the Msunduzi Museum has written to update everyone with regards the refurbishment of the Stage Coach.

‘Lionel (Astill) has been a star… and got the material for the upholstery donated; and someone who is going to donate the leather straps (for the springs); and someone for the canvas that covers the windows. I have a possible donor for one of the missing metal chains. Tomorrow I will be meeting with someone who (may) possibly have the material we need for the padding of the upholstery.

I also have someone that will donate a plaque containing the names of those who helped getting the coach back on track.’

So steady progress is being made and in due course we will also list the names of everyone who has contributed to this project in one way or another. Remember the coach may be in Pietermaritzburg but it was the coach paid for by the City of Durban back in 1952.