FEATURE:        Iran: Crossroad of history from the Persians to the Islamic Revolution – by Steve Kotze

The heritage found in the Islamic Republic of Iran spans a vast history, preserved in a large number of museums and cultural centres, including several of the 21 UNESCO World Heritage Sites. Guided by Carolyn Perry, an Oxford trained archaeologist who has previously worked in the British Museum, I participated in a visit that encompassed all aspects of Iran’s remarkable history and cultural legacy, from the Persian Empire to the modern era of the Islamic Revolution, including the overthrow the Shah’s regime in 1979. A number of important insights are to be gained from witnessing heritage policies in Iran, as well as useful practical elements of exhibitions that were visited in cities and at rural sites.

A full report of this entire happening from a proposal by Major Mark Levin in November 2016 to implementation by Sinothi Thabethe and his staff, particularly Steve Kotze, will soon be posted on the Durban Local History Museums’ website.

The Armed Forces Day Parade was held in Durban this year. Prior to the march past, a small group of us met for the moving ceremony of unveiling the SS Mendi Memorial Stone and the laying of a wreath by President Zuma. The military was represented by the heads of our services; serving and volunteer officers; civilians by the Premier of KwaZulu-Natal and many other dignitaries.

However for Ian Smith and Hardy Wilson possibly the most memorable part of the ceremony was meeting and talking with descendants of the Wauchope and one other family who had been lost when the SS Mendi sank in February 1917 . Remember it was the Reverend Wauchope who by all accounts heroically spoke the famous words that helped everyone meet their fate calmly and with great dignity as the vessel sank in the bitterly cold waters off the Isle of Wight.

Report Back:   A Look at the History Of Boarding Schools by Dudley Forde

What an entertaining and superbly researched presentation this was. Alternatively light-hearted for Dudley had his audience in stitches as he described boarding schools as many in the audience remembered them and sombre when we heard of the sometimes truly appalling practices used until recent decades. We went back more than 2000 years to hear about boarding schools and education under the Ancient Greeks and Romans. 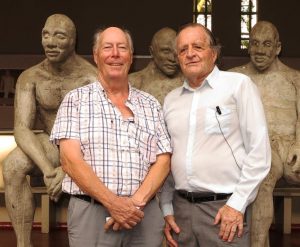 But let’s record some of what Dudley actually said. And for those who want to read his address in full a copy of Dudley’s presentation can be found by clicking here. SANS Boarding Schools Talk 2017-02-14 February

Boarding Schools have had an interesting and sometimes a murky past.

In amongst the earliest examples of formal education the Ancient Greeks and Romans employed very lowly slaves called ‘Paedagogi’ to accompany the sons of the household to attend at the local school from about the age of seven to learn gymnastics, wrestling and running, as well as some simple arithmetic, reading, writing, drawing and music.

It was the task of the Pedagogue slave to ensure that the boy tried hard at his physical endeavours, learned his work as well as his manners, and how to behave in company.

It hasn’t changed much; the slaves are still at it.

Although the boys travelled to school each day with the slave, even at home the slave and child were often housed separately from the rest of the family – a small beginning for the boarding concept.

The school often considered the world’s oldest boarding school, a model that was ultimately exported around the world, was The King’s School, Canterbury. It was founded around 597 AD.

In another England town called Winchester, where it is said the legendary King Arthur had ruled over Camelot, a Bishop, William of Wykeham, began the great work of his life – to erect and endow a College for seventy poor scholars who would live at the College and study. These seventy poor scholars were the sons of merchants, squires, farmers and burgesses.

The boys had to be between 8 and 12 years when admitted; of good behaviour, apt to study, and well versed in reading and song. The spirit of the College was set out in a Latin Phrase which freely translated apparently means – “Work, Walk or be whacked.”

And so to look at Boarding!

In the 19th century, the British boarding schools perfected the system of oppression and bullying that would provide grist for many an author.

George Orwell and Evelyn Waugh have portrayed boarding school life as being filled with freezing showers and cold porridge. But J K Rowling in the past recent times has helped, with the cosy picture she presents in her books.

With the popularity of Harry Potter novels, the number of children applying to boarding schools world-wide has apparently risen; many of them hoping to find their own version of Hogwarts. However, others have interpreted this trend as a reaction to longer working hours and the break-up of more marriages.

Modem boarding schools have done much to shed the image of boring rations and mass dormitories with 40 or more beds in one room; some going as far as providing Jacuzzis and on-suite bathrooms to private rooms. Similarly, they make great claims for their academic merit, particularly in light of the increase of exams, coursework and university entrance requirements facing children wishing to succeed in the modem world.

Alongside these more conventional schools, two types of boarding schools have also become more prevalent recently. Sports academies and stage schools seek to cater for children with particular interests and talents, while so-called ‘troubled-teens’ have been able to turn to a range of religious or wilderness schools to solve their problematic behaviour.

And so to the future.

Many of our Principals travelled (2015) last year to Helsinki to try to find out why Finland claims to have the best schools in the world. They found a mix of autonomy and excellence that had been created in education, relevant to that country’s culture.

A conference recently in Orlando USA, attended by a Principal friend, has blown her very experienced and well educated mind, with its emphasis on co-operative learning; on how much time we spend telling children to SIT DOWN and SHUT UP when they learn best when they are active and talking.

One of our boarding schools, borrowing from the remarkable success of a Danish model, has run an outstanding experiment for the past four years. Selected boys plan their own timetables, choose which lessons they attend, select the teachers they wish to have help them, and when, and where, and how they want that help. In each of the past years many of the boys concerned have completed the syllabus within half a year, and all involved reveal the benefits of the freedom and autonomy involved.

How can we make a difference and ensure that those we work with, and those who follow after, will make a significantly positive contribution to improved, innovative and relevant education through the unique medium we have in Boarding Schools?

In order to pursue this, I would like to invite you to watch this short film clip from the 1968 film about a British Boys’ Boarding School title         IF.

It tells the story of a House that deteriorates to utter chaos and makes for an excellent case study. In essence we can deduce a part of the cause as we watch the first house meeting of the year addressed by the housemaster.

After showing a brief clip Dudley asked everyone, ‘Did you notice the accent on discipline, the lack of concern for the fate of new boys, the uncontrolled and apparently condoned power of the prefects, as well as the internal bullying, and the belief that character development resides in a kind of survival level of the Boarding School- from Head Teacher to House Mistress and Housemaster, to Matron, Coach, Tutor or Duty person and to the girls and boys at every level?’

How can we make a difference?

Well what has it been down the years and what is it now, world-wide, that lends to significant difference amongst people and organisations?

For what are Mother Theresa, Princess Di and Margaret Thatcher remembered with respect and awe? Why are the names Mandela, Churchill and Lincoln invariably linked to gratitude and praise? Well simply because they led. Not managed, not ruled over, not organised, not controlled, but led.

They knew the power of winning hearts and minds; they knew they could not achieve anything without the permission to influence that their followers gave them; they know that no person can ever really control another to everyone’s benefit.

Leadership is developed best by example and rich experience. Opportunities for these have to be carefully created and crafted, monitored and mentored.

Historians and academics, indeed parents and concerned citizens who recognise that our future lies in today’s education, need to provide all the support and guidance possible to ensure our children receive what they deserve.

Thank you for this opportunity to share this aspect of schooling with you all.

Report Back:   The 100th Anniversary of the Sinking of the SS or Troopship Mendi by Hardy Wilson

Members watched a brief illustrated presentation about the tragic sinking of the SS Mende. Struck really hard by the RMS Darro which had been silently speeding in the dense fog of that bitter morning of 21 February 1917, the SS Mendi sank with terrible loss of life not just of her more than 600 volunteers of the SANLC but many officers and crew.

For years little was written about this appalling tragedy until Norman Clothier produced his definitive work Black Valour in 1987.  Subsequently the SA Military History Journal published a paper in 1995. (Note that all SAMHS Journals are superbly indexed and can be downloaded from its website at no charge). Now we have several more books on offer. Nick Ward’s self-published Black Titanic appeared in the UK in 2015 and just days past Fred Khumalo’s novel, Dancing the Death Drill, which is based on the Mendi was published as well as another novel Men of the Mendi by Brenda Shepherd.

Hardy finished by saying that in addition to naming one of the four frigates the SAS Mendi, we also have an Order of the Mendi which is given for great bravery primarily to civilians although members of the military have also been recipients. Armed Forces Day being held annually on 21st February will ensure we remember this day, its tragic events and those who died for their country for a very long time.

I have been meaning to send you an email in response to all your sincere support with the SA National Society.

Since the show I have been working on a few different projects.

Classes have also started for my BTECH so I have been keeping busy.

I’m actually emailing to share some more exciting news. Last year I was nominated for the Emma Smith Art Scholarship along with 9 other students. We had to set up an exhibition and go through an interview process and I was lucky enough to be announced the recipient this week! I am elated and will be using the scholarship money to travel to Japan to do an internship midyear. So things are looking up!  Again, thank you for all your support and I hope all is well on that side.