Mazeppa – The name first appears on the Durban map in the late 19th century but the schooner Mazeppa had a deeper connotation with other places on the map of South Africa. The web of association will take in some famous names: Mazeppa himself, Lord Byron; Joseph and George Cato, Dick King and Ndogeni, and Ray Campbell. It reaches to the Ukraine, the Karroo and the Wild Coast. It recalls the Great Trek, colonial frontier strife and the Boer War.

Several members have indicated they will be joining Pietermaritzburg and Highway Heritage Society members on this outing to Nagle Dam. Pack a picnic and picnic chairs so you can enjoy the company of other history lovers. Simon Haw, chair of Pietermaritzburg Heritage will provide a comprehensive explanation about this superb piece of engineering that for many years ensured a plentiful supply of water to the City of Durban. Please email Angela St George if you plan to attend. angiestg5@gmail.com

Details were circulated recently but can also be found and downloaded from the society website. The Cookes sent additional directions which were downloaded from Msinsi website – see last page.

REPORT BACK:      Controlling The Image by Professor Franco Frescura

Through no fault on the part of Franco Frescura we started last month’s meeting with ‘Murphy and his Law of anything that can go wrong will go wrong’, much in evidence. Investigation seems to show a software glitch but always master of the situation Franco then gave an outstanding presentation which also had links to propaganda; this time with the Chinese on the Rand Goldfields some 100 plus years ago; this too being created largely from his magnificent collection of postcards.

Franco said he would talk about a period and events in South Africa’s history which has affected us to this very day. His talk was also based on research which he and his wife Lesley had carried out about the mines of South Africa; research which should result in a book in the future. The year 1886 was the starting point and what they found in Mining Reports and Yearbooks was interesting and revealing. A favourite scheme discovered repeatedly, which was operated by the same people whose names appeared again and again, was to set-up a company with a fairly substantial capital of perhaps £125 000.00, but then obfuscate and delay for year after year but drawing their salaries as directors during this time until the capital was depleted. At this point the directors would announce, ‘Sorry we have decided this is not a payable mine and close the business down.’

After the South African War there was great reluctance on the part of black South Africans to return to work on the mines. This was understandable because of safety concerns, inter-tribal fighting and treachery. On the other hand in the interest of the Transvaal, South Africa and Britain it was important to get the mines operating productively again. So they went to China looking for labour, eventually bringing some 104 000 labourers over the period roughly 1903 to 1910; 60 000 probably being the maximum number here at any one time.

Selection of this labour was rather unselective with the result that some of the riff-raff and criminal element rapidly realised there were better opportunities than working on mines. Isolated farms and farmers were targeted which created great antipathy with fears on the part of much of the population and in course allowed the recently disarmed Dutch farmers to be re-armed. By 1910 all of these Chinese had been returned to China.

Two sides then emerged in this saga; the one side being the Chamber of Mines represented by Milner; the other side by Robinson and with postcards used by both as propaganda. The one side projected the positive side of Chinese life on the Witwatersrand. Robinson, a man with highly questionable mores, was in favour of the exclusive use of white labour. He was also the only mining magnate to support the Dutch government in the OFS and Transvaal. Robinson appears on the basis of circumstantial evidence pointing strongly to him as the publisher of the anti-Chinese postcards.

In 1904 a ship, the Tweeddale, arrived in Durban carrying ‘Chinese Coolies’; unusual looking people that the local people engaged in conversation. These arrivals were shipped to Jacobs, a locality far out of the city in those days. Then loaded into trains they travelled to the Rand; a journey of 26 hours, and by early May were at work on the mines. 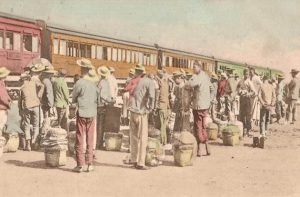 Unlike the employment conditions of local black labour the Chinese were employed on terms that covered their treatment, food and service with an agreement between the British and Chinese governments. In fact China had a Consulate in Johannes-burg to look after the welfare of its citizens. The contract was for three years but renewable for a further three years at the end of which the person had to go back to China. The contract also allowed the men to bring wives but in practice very few actually did which eventually became quite a problem. 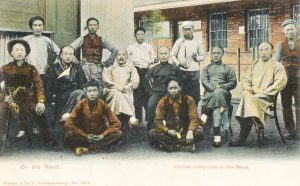 The Chinese consul, interpreters and others were patently high class Chinese as shown in the postcard to the left.

In contrast the Chinese workers were not at first issued with clothing, boots and allied items but had to work in the clothes brought with them.

Problems, caused by the inability of mine supervisors to communicate with the Chinese labour, arose within days and during a strike equipment was destroyed. Initially the Chamber of Mines then sent these men back to China deeming them unsuitable. 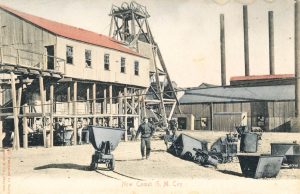 Later as the ability to communicate improved the effectiveness of Chinese labour also improved.

History records the Chinese were also reluctant to come to South Africa but because of the war with Russia then taking place on the Manchurian border, labourers who would normally have worked the harvest in that region, were unemployed and food remained unharvested creating a food shortage in China. A further lesson was that labourers from the North of China could not or would not work alongside men from the South so mines must ensure that all men were from one or other part of the country. Sadly there was little recognition by mines of cultural differences either. 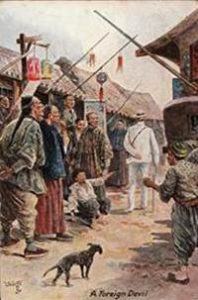 Gambling also proved to be a problem often because of an inability to repay debts and occasionally leading to suicides because of shame. Opium was also legally available although only from chemists providing one had a prescription, but with connivance from the police was available in the compounds and regrettably also proved a problem. 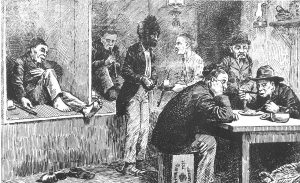 There was a rise in criminality and a farmer and his family were murdered somewhere north of Pretoria. The miscreants were quickly apprehended, tried and executed but this lead to a demand for a ‘Roll Call’ at the camps. This showed some 700 Chinese had absconded from the roughly 60 000 working on the mines. The SA Constabulary then established camps throughout the country where Chinese could be held. 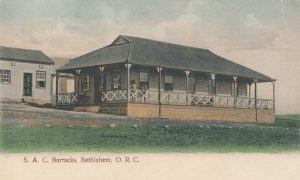 Chinese compounds were well built and well organised with facilities for mail to be sent home, although internally beds were concrete and built into the wall. But with a permit from the Supervisor labour was allowed to move freely and many of the Chinese were seen with bicycles and other items which were scarce back in China.

Following the South African War when there was such a chasm between the English and the Afrikaner another element came into local politics. Members of the British Labour Party said, ‘We made sacrifices in the war and now we should be employed on the mines’. Illustrated stories and cartoons appeared not just in the local Press but in overseas journals as well. 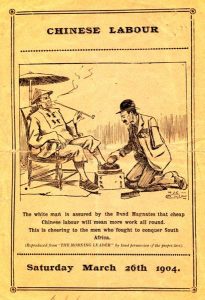 Franco highlighted the ‘body language’ in this photograph taken at the Robinson Gold Mine. 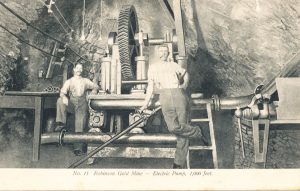 Time and space forbid a full transcript of this fascinating presentation but we cannot omit an observation about the Chinese cooks. There were complaints that the Chinese food cost more than that for others; a partial truth for rice was imported and therefore lead to increased food costs. However after the Chinese returned to China, the kitchens and equipment had established a higher basic level which was inherited and laid down a better standard for the labour that followed. 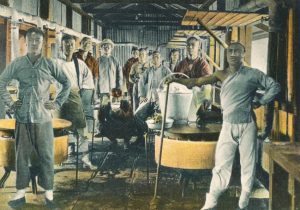 The postcard shows the Chinese Police with headgear indicating they came from parts of China which bordered India.

Some of the police were recruited from amongst the labourers who arrived to work on the mines. 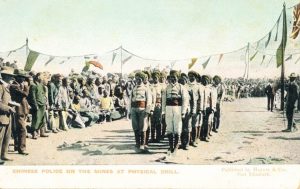 So no matter the opposing views which prevailed at the time the Chinese lived and worked on the mines, we can look back and see their influence has been felt and been for the good ever since.

We end with a photo of the ‘Rand Lord’ Robinson as well as a Wikipedia link which tells more about this son of an 1820 Settler. 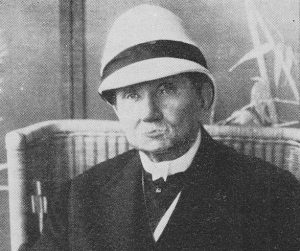 The article says his mother’s maiden name was Strutt so can the genealogists show any connection with Daphne Strutt?

Thank you Franco for a truly fascinating presentation which was exceedingly well received – even by members of the SA Military History Society who came to hear your presentation, ‘Controlling the Image – Propaganda and the Great War’. We look forward to hearing that sometime soon.

Editors’ note:             We trust you always enjoy re-reading what has been presented. The editors endeavour to accurately reflect what our guest speakers say but remember these summaries are a precis of what was actually presented and shown and certainly not an official opinion in any way.

KILLIE CAMPBELL BURSARY:       Judging by the huge increase in both number and quality of applications all the changes made to the society’s constitution last year have paid off. Ian Smith and his fellow KC Bursary Selection Committee have received 18 applications. It is the intention to award the successful applicant the first part of the bursary at the 110th Anniversary Meeting on 12 September – appropriately at Muckleneuk which was of course formerly Killie Campbell’s home.