PARKING:      Off Bram Fischer/Ordnance Road [next to the Museum]; security person is present.

FEATURE:      The Thames Valley Police Museum. Colin Boyes attended New Forest High School in Durban and then completed his BA Honours Degree (Art Historical Studies) at the University of Cape Town.  Colin is presently the Curator of the Thames Valley Police (TVP) Museum, Berkshire, England and has kindly agreed during his 3 week holiday, to talk to SANS about the TVP Museum and some of the interesting exhibits housed within it. These exhibits include evidence and material from the Great Train Robbery as well as the murderer Amelia Dyer.

Chair Ian Smith opened by highlighting how the events in Paris, following the Je Suis Charlie attacks, had brought all France together and contrived to make Paris the capital of the world. Ian went on to quote Edmund Burke, ‘‘All that is necessary for the triumph of evil is that good men do nothing.’’

If you have yet to renew your subs they are now overdue so please go online to download the renewal form, make the transfer for R75, which is surely incredibly good value, and send the details to John Cooke, whose email address is on the renewal form. And remember 2015 is the Year of Membership Growth so please encourage your friends to join SANS. The maths says one new member each year will see our membership doubled. Use the link to the necessary form, whether for renewals or new memberships: http://sanationalsociety.co.za/join-sans/

Ian specifically thanked the Director and staff of Kwa Muhle Museum for their ongoing support. We are all most appreciative of being able to use this wonderful and truly historic facility.

On a show of hands members were asked who would support mid-week outings and based on the response the committee will include these in future calendars.

Hugh Thompson our guest presenter was introduced with a wonderful anecdote. Hugh was Head of Drama at Edgewood College. However he devoted many hours to helping students with any kind of speech impediment to overcome these, quietly doing this when others were off following sport or other distractions elsewhere! Reputedly no one left Edgewood without having beaten what is after all a huge distraction in any career or lifestyle.

We were then enthralled by the video ‘Richard III – The New Evidence.’ After his death at the Battle of Bosworth on 24th August 1485, Richard’s body was abused, dragged and mauled before being thrust or squeezed into a grave far too small for his body.

When found there was some irony in that the car park bay under which his body had lain for so long was clearly marked with an R.

The original story and the first movie to be made was entitled ‘The King and the Car Park.’

The new story told how the University of Leicester with teams using the latest scientific techniques, detailed forensic analysis and a superb recreation of a host of factors established with great certainty the reason that Richard III was indeed the last Plantagenet king to die in battle. But perhaps most incredible was that the university found an almost identical body double with whom they were able to test and develop the data and materials to prove the theories.

And the conclusion from all this research was that: 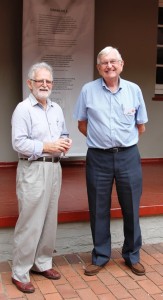 Richard  III  had  been  an  outstanding horseman;
was  able to fight very successfully using the wea-
pons of the time whilst on horseback;  had for much
of  his  life  had  a  sensible well balanced diet  and
would  have  really  only  suffered  if fighting on the
ground  due to  the  reduction  in his lung  capacity
because  of  his  disability.     However his lifestyle
changed after he assumed the kingship for it seems
that for the last few years of  his  life  gluttony  ruled
and was probably the ultimate cause of his downfall
as he lost his previous fitness.

This was Great Entertainment so thank you Hugh!

INVITATIONS:
Vusi Buthelezi has sent an invitation to Professor Jeff Guy’s Memorial which will be held in the Killie Campbell gardens at Muckleneuk on Saturday 24th January at 14:30. All members are welcome. There is on street parking in Essenwood and Gladys Mazibuko roads and entrance is on Gladys Mazibuko Road.