The exhibition opening on Tuesday 12th July was a memorable and noteworthy occasion. As Sinothi Thabethe highlighted in his welcome as director of the Durban Local History Museums, it was the result of splendid collaboration between the museums and the SA National Society.

It was a truly colourful evening with the marquee bathing the courtyard with sensational colours. Past and present members of the military wore uniforms bedecked with ribbons. The 1st Medical Battalion Pipe Band played most appropriate music in the quadrangle which many noticed included the evocative Battle of the Somme so reminiscent of Delville Wood.

Steve Kotze played the role of Master of Ceremonies in his usual competent and capable way first introducing his director Sinothi Thabethe and then Chairman Hardy Wilson who spoke briefly about the background to the exhibition and how proud SANS was to have been given this opportunity.

Leon Erasmus headmaster of DHS spoke of all the school’s Old Boys who have given their lives for their country in so many actions and places since the foundation of the school. A beautiful wreath of 12 poppies sat in front of the podium. Each poppy represented one of the 12 Old Boys who died during the Battle of Delville Wood; the wreath being made from willow twigs in the shape of a cross, represented the wood.

Major Mark Levin held everyone spellbound with his emotive address. He described the horrors of WW1, described at the time as The Great War. This was a war that was anything but great for soon people saw men returning from the many fronts maimed and wounded. He spoke of the hunger suffered by men and animals on the Western Front and how people slowly realised the horrors of what was happening. He spoke of the effects on families and loved ones that would affect their lives for decades afterwards. Yet within 21 years there was another war when both Fathers and Sons could even be found serving at the same time. And of course he spoke of the bravery of the men of the South African Infantry Brigade which is forever enshrined in our history.

Major Levin then officially declared the exhibition open when it appeared the 150 guests all managed to view the exhibition before supper was served.

This exhibition is scheduled to run until 2018 to coincide with the end of WW1. It is one of two exhibitions now on show at the Local History Museums. At the Old Courthouse Museum the exhibition Durban in WW1 will run during the same time span and the two complement each other.

Please go and see both for they tell a story that must never be forgotten.

Visitors heard first-hand about the composition and story of the 10 panels which form the exhibition at KwaMuhle. They tell the story of Delville Wood, of DHS and its old boys killed, wounded and taken prisoner at Delville Wood, and show the cemeteries, museums and memorials that today continue to recount the story of the Battle of the Somme, of which Delville Wood is just one part. But a panel just paints a quick picture so as part of the exhibition there is a 24 page brochure which provides depth and detail. There is a similar brochure for Durban in WW1 so make sure you collect and read them both.

But what you will not see is the wonderful German Field Gun that sat on the pavement outside KwaMuhle for the exhibition opening. We have to say a huge Thank you to Glenwood High School for its loan and for loaning the many artefacts which fill one of the display cases.

The other display case shows DHS artefacts covering the 100 years since Delville Wood, with the first item the school magazine listing its casualties there. Remember DHS was just 50 years old when the battle started in 1916.

The day before the exhibition opened it was realised that not everyone understands the significance of the poppy. At this point the only place to include something was on the back of the program so we take this opportunity of showing members what was written.

Poppies and the DHS Wreath

Poppies are used as flowers of remembrance in the United States, the United Kingdom and the Commonwealth. The DHS Wreath you see tonight has twelve poppies, one for each of the DHS Old Boys who died during the Battle of Delville Wood. (The names of these twelve young men were then listed in the program).

Lt Col Dr John McCrae wrote possibly the most famous poem about war and the poppies that grew in Flanders Fields and France, reputedly after his close friend was killed in the war in 1915. Sadly McCrae died of pneumonia whilst serving in 1918. He was just 47.

In Flanders fields the poppies blow
Between the crosses, row on row,
That mark our place; and in the sky
The larks, still bravely singing, fly
Scarce heard amid the guns below.
We are the Dead. Short days ago
We lived, felt dawn, saw sunset glow,
Loved and were loved, and now we lie,
In Flanders fields.
Take up our quarrel with the foe:
To you from failing hands we throw The torch;
be yours to hold it high.
If ye break faith with us who die
We shall not sleep, though poppies grow
In Flanders fields.

Again we encourage everyone to visit both exhibitions, Delville Wood 100th & DHS 150th at KwaMuhle and Durban in WW1 at the Old Courthouse. And of course look at the other exhibitions whilst you are there too. As said earlier the two will complement each other and are scheduled to remain open until the end of 2018.

During the past two weeks much has been written about Delville Wood and members and committee members have attended memorial services in many places including Delville Wood itself.

Glenwood High School held what we believe was the last service on Thursday 21st July, exactly 100 years after Brig General Lukin reviewed the men able to parade the day after leaving Delville Wood. The boys of Glenwood under the leadership of Kevin Jordan provided apt tributes at this moving service and demonstrated that our young people do indeed remember them.

The mini pipe band provided really appropriate background music in the quadrangle but 100 years ago on the Somme pipers bravely lead troops into the war zone and sometimes headed the parades of the few who had survived fierce battles in this 1916 holocaust. 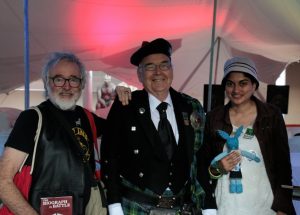 The South Africans fought with the Scots so it seems appropriate that Alexander Coutts should attend in his Caledonian Society Regalia. Alongside are two other society members, who normally serve as official photographers, Sanabelle Ebrahim and Mikhail Peppas, and highlight what a colourful scene this was. 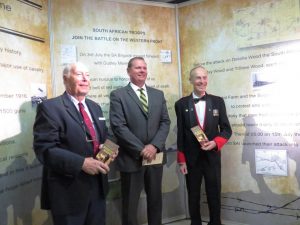 Hardy Wilson – Leon Erasmus – Mark Levin front some of the display panels whilst holding copies of the exhibition brochures. 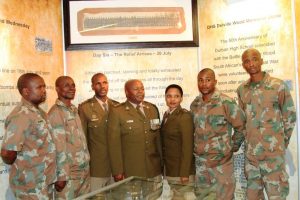 Officer Commanding Natal Carbineers, Lt Col M Mhlope together with six of the Junior Officers who attended the event.

SANS has to thank to Major Matthew Everett for ensuring invitations were issued to the Junior Officers Association.

The framed picture above this group is a 100 year old photograph of 2nd Bn B Coy taken at Borden in Hampshire in 1916 before the men left for the Western Front.