FEATURE:        The story behind the writing of ‘Their Destiny in Natal: the Story of a French Colonial Family of Natal’.

Georges Védie has written a fascinating, detailed examination, much to the consternation of some of the family, of the part played by French Colonials in the development of Natal. Tonight we will hear about the amazing research that was required, in many different places and countries, the origins of the Franco-Mauritians, the French in the Indian Ocean and 19th century Natal.

We can tell you that Georges talk will not be about the book per se, but this will be available for those who would like to learn more about this intriguing period in the history of the period and Natal in particular.

We’ve almost had a sabbatical post the memorable opening of the Delville Wood and DHS Exhibition at KwaMuhle followed as it was by the August National Women’s Day holiday so come and hear Georges Védie and update yourself with what fellow members have been doing, many of whom we can report have been hither and thither during the past weeks.

Please encourage friends to visit the Delville Wood Exhibition at KwaMuhle Museum as well as Durban in WW1 at the Old Courthouse Museum for the two make for an interesting morning or afternoon outing. Encouragingly we have seen both overseas and local visitors and there is now a visitors book at the museum where people can leave comments and contact details if they desire.

Last year Elsa Pooley spoke to members about the rehabilitation of the Beachfront for the 2010 World Cup and her work in stabilising the dunes. At the time we promised an outing at which Elsa could show us the process and how nature was helped to achieve a successful outcome. Please diarise Wednesday 19th October when we’ll meet at 0700 to accompany Elsa on a beachfront walk, hopefully together with the UKZN Alumni. The walk will be followed by a rousing breakfast at one of the beachfront cafes so this will be a social occasion as well.

The society’s AGM will once again be held at the Royal Natal Yacht Club following a similar format to previous years with the AGM followed by an RNYC Buffet and this year we have well-known local artist Barbara Siedle as our guest speaker. But details will follow. Just diarise Saturday 19th November in the interim. 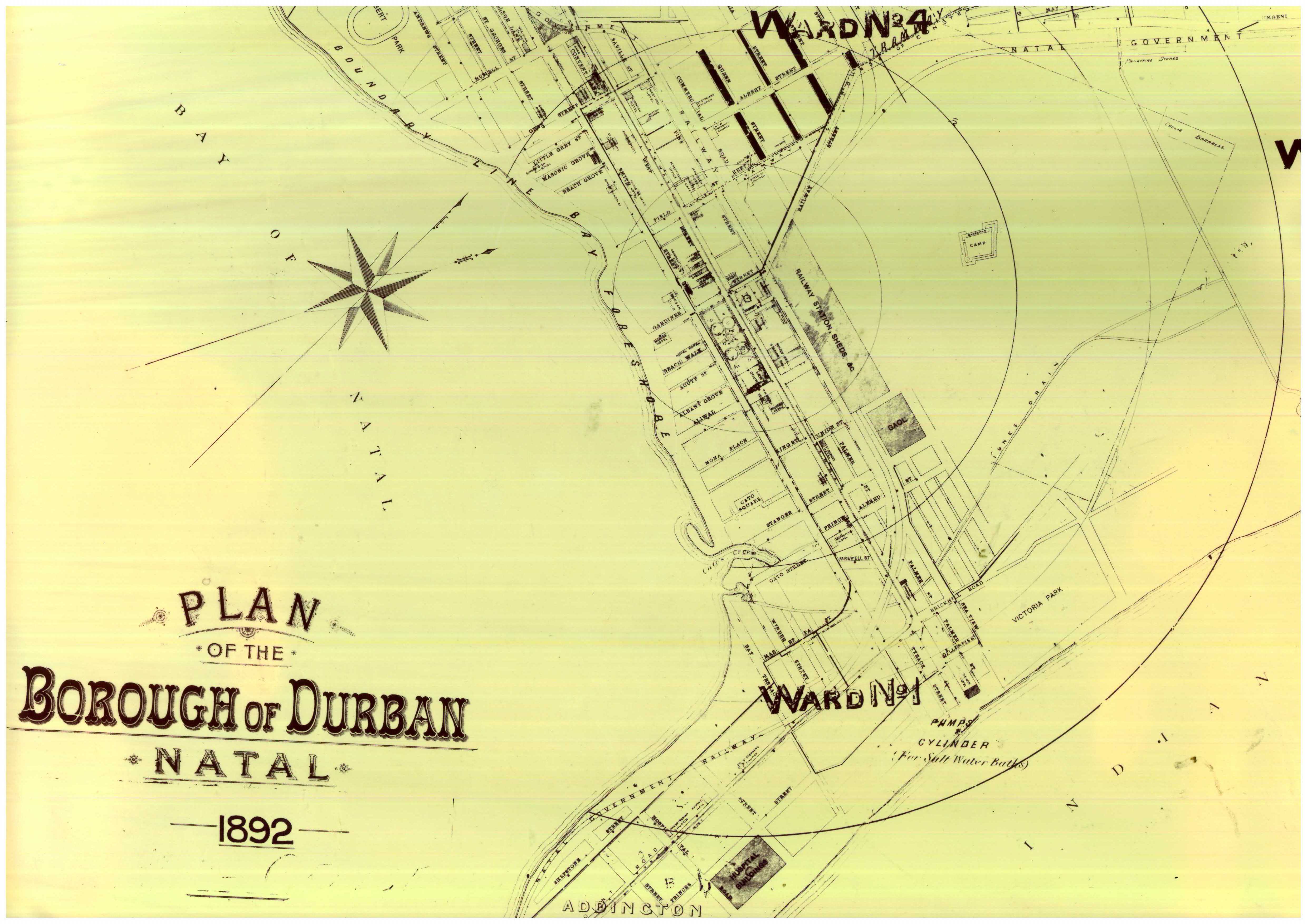 Arthur Gammage has an 1892 Map of Durban part of which appears above. It is not possible to enlarge this sufficiently to retain legibility and see information relevant to the story so one area of the map has been enlarged which is shown as the lower image. The location of Durban High School in 1892 appears on the map alongside Little Grey Street. (Look to the right of the N in LINE along the edge of the Bay). At that time was the third building occupied by the school in less than thirty years. In fact DHS left this spot in 1894 and moved to its present location in St Thomas Road on the Berea.

Arthur circulated both the map and photos, which are shown next, to several people which brought an interesting response from David Bennett, who is both a DHS Old Boy and keen student of both Durban’s and Military History. As an aside David who is a society member also helped ensure the memory of Major Edwin Swales VC remains very much part of DHS’s history. 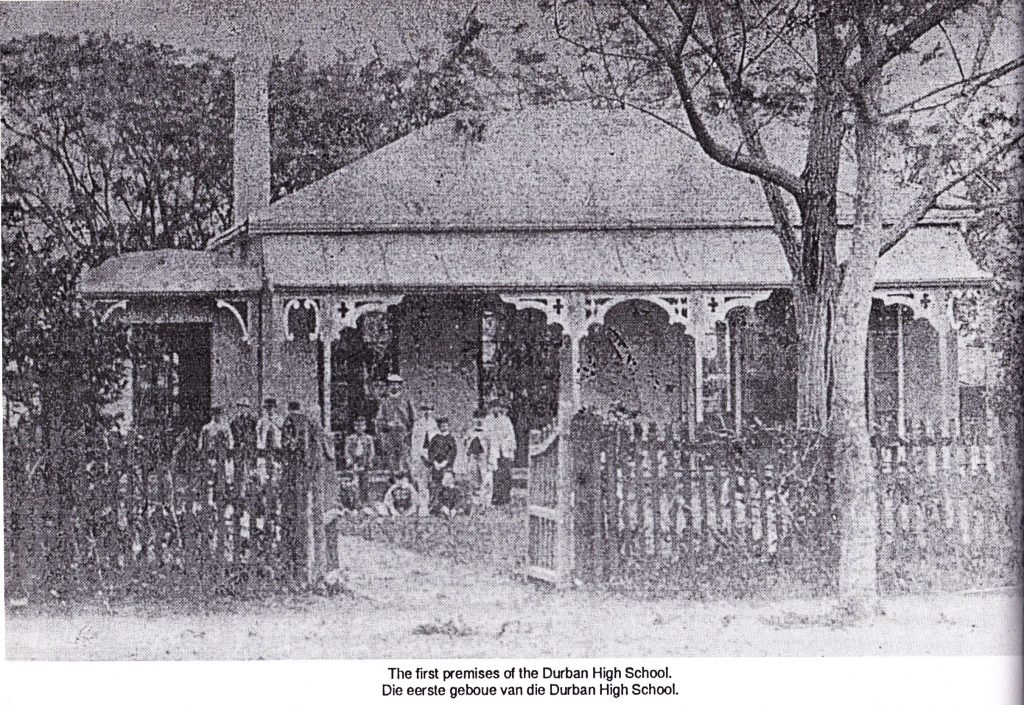 David writes, The photo does indeed show the building which housed the FIRST school, Durban High School. The School occupied, on 1 June 1866, a two-roomed building in Smith Street (built by William Hartley, during the time he was mayor) and somewhat ambitiously called “Mansion House”. Your photo shows this School, and, according to Hubert Jennings in “The D.H.S. Story: 1866-1966” the photo of the School is from the Forbes Collection. There were just seven pupils on the first day.

The exact location of the FIRST school was in Smith Street, opposite the old Smith Street Police Station, near Broad Street.” (1866 – 1868).

By the end of 1866, enrolment at the School had reached 40, and the building was now inadequate for the purpose, and the School moved – during 1868 – to the ‘granary’ in Cato Square – a building which was ‘a roomy but otherwise unsuitable building’. During the time the school was at this location attendance rose to 100 boys. This same building was later, in 1875, described by Robert Russell (the First Headmaster 1866-1875) now the Inspector of Education, as “a large, two-storeyed building in the East End of Smith Street. The ground floor consists of one large hall, two classrooms and two lobbies. The upper flat consists of large hall used as a drill-room for the Cadet Corps in wet weather, and a small room in which evening school is kept by the assistant master.”

The SECOND school location – Cato Square must have been in close proximity to Cato’s store (near Cato Creek) where his home and office was also located, near Mills Lane / Smith Street, and which, in 1854 also became the first Durban Mayor’s Parlour, when Cato became first mayor in that year. This was the so-called ‘old barn’ or ‘granary’ location. (1868-1879)

Here (the ‘old barn’ in Cato Square) the School remained, until the end of the Anglo-Zulu War of 1879. The School was to have earlier occupied the premises of the Old Hospital, on the Foreshore (‘Bayside’) earlier, ‘but the military had taken over the hospital for their casualties, and so the town was constrained to keep the Old Hospital until the war was over’ – and so the Old Hospital thus became the third School premises, in 1880. And it is this building – the Natal Government Hospital building which is referred to in the plaque shown in the next photo.

The THIRD school was therefore the Natal Government Hospital Building, on what is today the Esplanade (Victoria Embankment) – and on which site, (completed in 1911) the present Law Courts building is located. (1880-1894)

The School occupied the Hospital from 1880 to 1894 – when it moved to the present location in St. Thomas Road, Berea – a site suitable at the time, but now wholly inadequate (once again) for a high school the size of D.H.S.

The recent email about the National Railway Museum’s Ambulance Train Exhibition elicited a couple of interesting responses but how about this fascinating one from a member?

The card is a 3D card; is dated 1900; sepia was very popular back then but note the amount of advertising packed down each side of the card. The writing on the card is our caption. 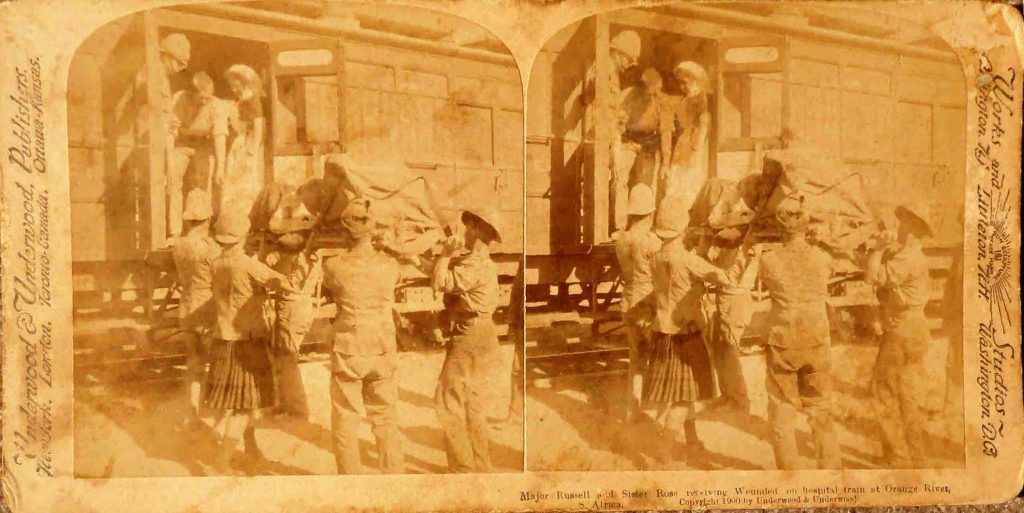 If you have 3 D glasses you’ll see the real effect but may be able to manipulate the image to make it a 3 D one. Good luck.

The Friends of Sibudu put on a most interesting pre-AGM series of presentations about this amazing Middle Stone Age archaeological site on Saturday 20th August.

Whilst there has been an ongoing archaeological dig for about 10 years; there is recognition from Amafa; SAHRA is reportedly looking into or processing the paperwork for national recognition; there is little doubt the site should be a World Heritage Site.

But as always there are immense human pressures so the moves to have this incredibly important site on the uThongathi River recognised will require both the recognition and the accommodation of the interests of the local people for everyone to benefit. And everyone must benefit for this site is too important not to achieve permanent protection.

Plans are being discussed for the creation of a multi-facetted outdoor museum and educational facility and SA National Society will look on with great interest and where possible encouragement.

Newsletter and Program for September 2016