A combination of factors meant this was the best attended SANS outing for some time. And delightful as they were it was not just the Cream Scones and coffee that set the tone although what a way to start. They did allow more than 40 members and friends to chat and get to know each other before climbing the stairs to the remarkable MOTH Meeting Room, which is not usually opened to the public.

April is the 100th Anniversary of that terrible event Gallipoli, so it was good to hear that Charles ‘Evo’ Evenden who had been at Gallipoli but who was now the cartoonist at the Natal Mercury was encouraged by his editor to start the Memorable Order of Tins Hats. M.O.T.H. is a charitable movement that allows former service people to share comradeship and fellowship in many parts of the world.

We were however on a tight schedule so everyone moved on to the extensive museum downstairs. What a remarkable and diverse collection of military memorabilia. One of the MOTH guides was heard to say ‘Most visitors come back for another visit’ and one could believe that as there is so much to absorb.

Ken Gillings then shepherded everyone across to the garden where he painted a picture of Natal and Natalia in the 1830’s and 40’s. Ken’s knowledge is encyclopaedic so we started to form an understanding of the conflicts of the period when the Voortrekkers were settling and the Republic of Natalia had been established in Pietermaritzburg. We discussed the Battle of Blood River and the events which lead to a day being remembered even now by friend and foe alike.

We heard about the early British immigrants and how events slowly changed so that Natal took on greater importance in the eyes of those in the Cape. We heard about Dick King. 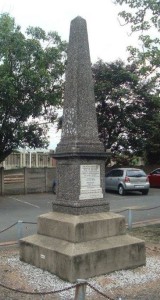 Memorial and Inscription Erected in February 1920 Ds A M Murray Moderator appears near the bottom but can hardly be Dr Andrew Murray who died in 1917. So who was this gentleman?

Then we left to visit Congella and its sadly damaged memorial. This was followed by a trip to a War Grave beside Maydon Road where a few of the Trekkers lay with a memorial erected in 1920 recording their names. 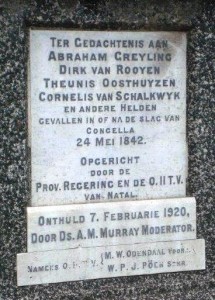 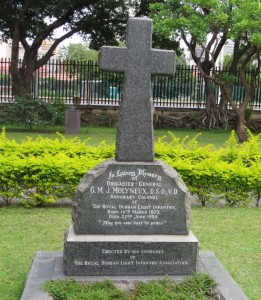 On to the War Grave Cemetery in Whyte Road, maintained superbly by the Commonwealth War Graves Commission, and where many photos were taken before the group returned to base at Warriors Gate to round off a truly fascinating day. Ken spoke of the British Regiments that fought in the various wars of the 1800’s and then mentioned their names; regiments that have gone down in history defending man’s right to freedom, honesty and justice.

It is not possible to record everything Ken had told us but this link to Wikipedia provides a wealth of information. Within that article there are further links so members can gain a real understanding of the Boer; British and Zulu history of that period.   http://en.wikipedia.org/wiki/Natalia_Republic

We are proud that Ken is one of our members and indebted to him for sharing his vast knowledge of this fascinating subject. Thank you very much for an excellent outing and enthralling morning. Thanks also to Margaret Cooke and Graham Allan for providing a great selection of photographs. Lastly thank you to the many MOTH folks who guided us around and looked after us so well at Warriors Gate Museum.

Others will undoubtedly wish to go back to Warriors Gate which is usually open daily except Monday. Telephone the curator 031 307 3337 to confirm and for the record May van der Merwe provides light lunches and snacks provided you give her forewarning so ask for May and discuss options if you need to look after the inner man too. The gate into the area where we parked is usually open from 10:00 or park across the road by the small shopping complex.