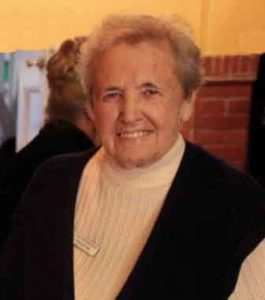 Vice-President of the SA National Society Naureen Craig has been chosen as the first person on the Society’s Honours Board.

Naureen Craig was unanimously elected a V-P at the November 2014 AGM when Chairman Ian Smith said this,

There can be little doubt that for  seven years SANS revolved around Naureen who was Chairman for five, and then President for two years. During this time SANS increasingly grew and prospered. This was by no means always plain sailing as she had to deal with many difficulties , in growing the Society. All this time Naureen sagaciously steered a course which upheld the values of SANS such as ensuring that all races were welcome.

Regular meetings were held, the finances were carefully kept in good order, and the Killie Campbell bursary continued to be awarded to post graduate scholars of KwaZulu-Natal. Throughout these years Naureen continued to write and distribute her informative monthly newsletter to members of SANS which kept them informed of the activities and enabled SANS to keep in contact with other folk she knew. Innovation took place too for a web site was begun.

There can be little doubt that it was Naureen’s determination and tact that saved the Society from near extinction and nursed it back onto the road of solid good health.