Ken Gillings who died in 2016,  was a military man, well known and respected  Military field guide, author, and past Chairman of the SA Military History Society. He was also a real gentleman, well liked by all who knew him, and a member and great supporter of SANS.

This eulogy  by Jack Frost, speaks for itself and commemorates this great life. 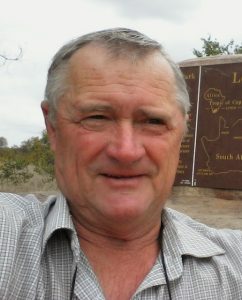 KEN Gillings, soldier, military historian, Moth and unparalled battlefields guide, died in a drowning accident while on holiday at Cape Vidal in December 2016.

I first encountered Ken Gillings in the mid-1970s. He was then an active member of the Durban Ramblers’ Club and had hired a railway Pullman bus to take a party of Ramblers on a history tour to Northern Natal. There were a couple of spare places and as a member of the Pietermaritzburg Ramblers’ Club I was fortunate enough to secure one of them. Our guide for the weekend was the formidable Sheila Henderson (whose obituary is published elsewhere in this edition of Natalia). One of the significant places we visited was the old Trappist monastery of Maria Ratschitz in the Biggarsberg, at that time abandoned and deserted, a sort of ecclesiastical Marie Celeste.

The last time I saw Ken was also on a history tour, some 40 years later, in August 2016, which he had organised, this time under the auspices of the Military History Society. It also encompassed a visit to a historic church, this time the splendid neo-Gothic St George’s Garrison Church in Pietermaritzburg, which he had never before entered and which made a great impression on him.

The seed of Ken’s interest in history was originally sown in visits to his grandparents in Dannhauser when he was a small boy. It blossomed as a schoolboy at Westville High School under the tutelage of his history master Ron Warner.

Ken’s military career began when he underwent National Service in the artillery at Potchefstroom in 1965. Posted to the Natal Field Artillery after nine months’ training, he continued as a volunteer, retiring as Regimental Sergeant Major in 1988 after 23 years’ service. Thereafter he served as Artillery Warrant Officer of 84 Motorised Brigade, then in HQ Unit of 8 SA Division (part time forces). He was finally posted to HQ Unit of 74 Brigade.  In retirement he became an active member of the Winston Churchill Shellhole in Westville where he was Old Bill at the time of his untimely death. He was also an Honorary Life Vice President of the Gunners’ Association of South Africa.

Gillings was friendly with Darrell Hall, managing director of the fruit-processing firm H. L. Hall and Sons (Pty) Ltd.  Both were artillerymen, Hall having served in the Royal Artillery. Hall offered him a position as a representative for Dickon Hall Products in Natal in 1971 and he eventually retired as the firm’s National Sales Manager in 2003. Thereafter he started guiding professionally as an accredited specialist military history guide.

Ken Gillings’ commitment to heritage saw him serving for seven years on the Natal Regional Committee of the National Monuments’ Council and he was appointed to the Council’s War Graves  Division for some years. He chaired the KZN Regional Committee for the Commemoration of the Centenary of the Anglo-Boer War of 1899-1902 (for which he was given the Paul Harris Award by the Rotary Club of Westville) and was a member of the 1906 Bhambatha Centenary Commemoration Committee. He was also a member of the Ladysmith Siege Museum Trust.

In his capacity as a tour guide, Gillings guided the International Churchill Society around the KwaZulu-Natal battlefields during a pilgrimage arranged by Sir Winston Churchill’s granddaughter, The Hon Celia Sandys, which included his daughter Lady Mary Soames. During the Anglo-Boer War Centenary Commemoration, he guided Prince Phillip, Duke of Edinburgh and Jacob Zuma, then Deputy President, around Spionkop. He facilitated the erection of a memorial on the Isandlwana battlefields to N/5 Battery, Royal Artillery, which was unveiled by The Master Gunner of St James’s Park, Field Marshall The Lord Vincent in the presence of His Majesty, King Goodwill Zwelithini during the celebrations to mark the 120th anniversary of the battle in 1999.

Unsurprisingly, Gillings was a pillar of the South African Military History Society. He chaired its KwaZulu-Natal branch from 1989 to 1998, thereafter continuing to organise the programme of monthly lectures as well as its annual battlefield tour up to the time of his death. In 2005 he was granted Honorary Life Membership of the Society.

Gillings had numerous articles published in the Military History Journal of the SA Military History Society as well as in the (UK) Journal for Army Historical Research. He contributed to the series of booklets, Battles of the Anglo-Boer War, published by Ravan Press. His last two works were Discovering the Battlefields of the Anglo-Zulu War in 2014 and in the following year The Road to Ulundi Revisited.

The original Road to Ulundi, now a valuable piece of Africana, was published by the University of Natal Press in 1969. It is a beautiful reprint of 67 of the watercolour sketches done by Lt-Col. John North Crealock, Lord Chelmsford’ military secretary during the Anglo-Zulu War. Ken set himself the task of tracking down the exact spots, some exceedingly remote, where Crealock had sat while he painted each scene and photographing it as it is today to produce a fascinating “then and now” record of the changing landscape. It was a task which took him three years and which only he could have accomplished.

IFP president, Mangosuthu Buthelezi, praised Gillings for being “a remarkable historian, for whom I had great respect”.  He said that he first met Gillings when the South African Military History Society hosted an international conference on the 130th commemoration of Isandlwana and Rorke’s Drift.

“I was impressed by his insight into the battles of the Anglo-Zulu War and admired how he captured the pathos of the battlefield, without emotively favouring either side,” he said.

He had been honoured to be asked to write the foreword to Discovering the Battlefields of the Anglo-Zulu War, especially as the author had “undertaken a monumental task of meticulous research”.

“I am haunted by the thought that we lost Mr Gillings the day after a statue of my great-grandfather, King Cetshwayo, was unveiled at the Castle of Good Hope. That event had led me to reread Mr Gillings book, and I had been delighted all over again by his attention to detail and obvious love for his work.”

Ken Gillings leaves his wife, Heather, a son and daughter-in-law, and a grandson.