Note: If you have trouble seeing this post, please scroll down for Word Version. 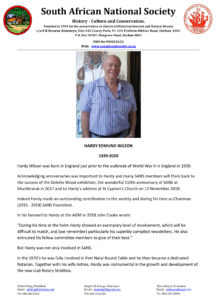 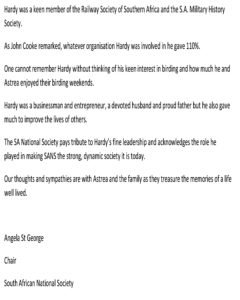 Hardy Wilson was born in England just prior to the outbreak of World War II in 1939.

Acknowledging anniversaries was important to Hardy and many SANS members will think back to the success of the Delville Wood exhibition, the wonderful 110th anniversary of SANS at Muckleneuk in 2017 and to Hardy’s address at St Cyprian’s Church on 11 November 2018.

Indeed Hardy made an outstanding contribution to the society and during his time as Chairman (2015 – 2018) SANS flourished.

In his farewell to Hardy at the AGM in 2018 John Cooke wrote:

“During his time at the helm Hardy showed an exemplary level of involvement, which will be difficult to match, and (we remember) particularly his superbly compiled newsletters. He also entrusted his fellow committee members to give of their best.”

But Hardy was not only involved in SANS.

In the 1970’s he was fully involved in Port Natal Round Table and he then became a dedicated Rotarian. Together with his wife Astrea, Hardy was instrumental in the growth and development of the new club Rotary Strelitzia.

Hardy was a keen member of the Railway Society of Southern Africa and the S.A. Military History Society.

As John Cooke remarked, whatever organisation Hardy was involved in he gave 110%.

One cannot remember Hardy without thinking of his keen interest in birding and how much he and Astrea enjoyed their birding weekends.

Hardy was a businessman and entrepreneur, a devoted husband and proud father but he also gave much to improve the lives of others.

The SA National Society pays tribute to Hardy’s fine leadership and acknowledges the role he played in making SANS the strong, dynamic society it is today.

Our thoughts and sympathies are with Astrea and the family as they treasure the memories of a life well lived.