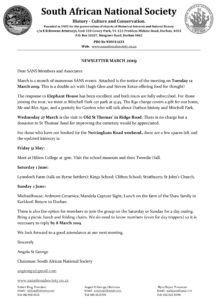 Notice of meeting March 2019PROGRAM FOR MARCH 2019
MEETING DATE: Tuesday 12 March 2019
VENUE: KwaMuhle Museum, Bram Fischer Road [Ordnance Road] Durban.
TIME: Meeting commences at 1715; Refreshments will be served from 1630.
PARKING: Off Bram Fischer/Ordnance Road [next to the Museum]
COST: Members: R20.00 Visitors: R40.00
There will be two short talks for the March meeting
TITLE OF TALK: Food from Antiquity: Rome and KwaZulu-Natal
SPEAKER: Hugh Glen & Steven Kotze
Hugh Glen: On History, Food and a Culture Gap
Apicius was one of three Roman gourmets who lived in the first and second centuries AD, and who gave their name to a recipe book that survives in two fifth-century manuscripts. It is often pleasant to try to recreate these recipes in a modern kitchen, and tasty dishes are the rule rather than the exception when one does this. However one could frequently wish that Apicius, or his cook, were by one’s side as mentor while one does so. But even given the language barrier and the impossibility of time travel, would this work? We considered, briefly, the absence of weights, measures, time and temperature in the recipes. Then we considered the culture gap implicit in first and 21st century acquisition of materials, and indeed materials available to one cook but not

the other (laser now, tomatoes, potatoes, cornflour and much else then). Looking into the nature of a Roman kitchen led to thoughts on the generally insanitary nature of Roman urban housing, and why cooking at all in an insula was at best impractical and more likely very dangerous. We conclude that when we examine almost any historical figure in a SANS lecture, we miss at least as much as we see of the background against which these people operated.
“Truly, the past is a different country: they do things differently there”, as

the wise man said. We should maybe bear that in mind when considering the deeds we discuss.
*

Steven Kotze: Wazalelw’ esithebeni – Patterns of nutrition among African communities in KZN
The Zulu language idiom “born on an eating mat” indicates a person of comfortable means, the equivalent of “born with a silver spoon in his mouth”, and reflects the central importance of food in a subsistence culture with limited means of storing surpluses. Archaeological and ethnographic evidence from the past two millennia presents small yet fascinating glimpses of what different communities have eaten at various points in history, and how that changed over time. Undoubtedly the most significant revolution occurred in the 4th century CE when agriculture was introduced to the region, but the first farmers relied heavily on wild foods to supplement their diets. The forms of nutrition consumed by agricultural communities also varied considerably over time as new foodstuffs were introduced, most notably the Central American cereal maize, but exotic tubers were also new ingredients. Finally, many of the traditional recipes for delicacies eaten in African homesteads during the period of the Zulu Kingdom in the 19th century appear to have vanished from the culture. These meals survive only as descriptions recorded by foreign visitors who took part in feasts, & their accounts provide us with rare insights to the way that eating has changed even within the past 150 years. The talk presents a brief synopsis of food cultures from this region.
*
Hugh Glen is a Johannesburger “born, bread and butter” who came to Durban some 15 years ago, and considers that to be about the brightest move he ever made. He did his B.Sc. and Honours in botany at Wits, then moved to UCT, where he did his M and Ph.D. under the late great Prof. Schelpe (remember him from SABC’s ‘Talking of Nature’?), working on different groups of vygies. He joined the then B.R.I. in Pretoria in 1977, working on their computer database of plant specimens (at that time, a world-beater, for all that most of the bells and whistles were impractical). He spent 1980 to 1982 as South African Liaison Botanist at Kew. It is probably significant that the best piece of advice he was given before leaving was “Richmond Adult College gives excellent evening courses: sign up for some”, and so he signed up for one on British Archaeology. And 100-odd weekends were spent in the (mostly) English countryside in search of the ideal combination of ancient monuments / historic houses and real-ale pubs. Back home, he wrote up Aloe for the Flora of southern Africa, then developed an interest in plant nomenclature and the taxonomy of cultivated plants. The latter led eventually to the publication of Guide to the Introduced Trees of southern Africa, which he co-authored with Prof. Braam van Wyk. Hugh met Hardy Wilson through the Railway Society, and Hardy talked him into scanning all that could be found of the now-defunct SANAS News; Hugh then joined the Society and has enjoyed the company and the talks ever since.
*
Steven Kotze attended school at Maritzburg College and graduated from the University of Natal in 1994 with a BA Hons degree specialising in the Anglo-Zulu War of 1879, which was awarded cum laude. Since 1997 he has worked in the field of public history and heritage, including as guide at Isandlwana and Rorke’s Drift while employed by the Rattray family at Fugitives’ Drift Lodge and assisting to develop historical and cultural tourism policy for the Greater St Lucia Wetland Park. While employed as a lecturer at UKZN and the Vega School he also worked as a heritage consultant. Steven has published two books and numerous articles on South African heritage and has been on the staff of Durban’s Local History Museum as an exhibitions researcher since 2013.