A successful 2019 AGM was held at the Durban Country Club on Saturday 16 November. Apart from the normal proceedings those attending, heard a fascinating address on the life of Marjorie Courtenay-Latimer and her work with Caelocanths and her extensive travels around South Africa.

Just to add some synchronicity to the event, a Caelocanth was spotted off Pumula on the South coast, the next week and photographed by Mike Fraser. 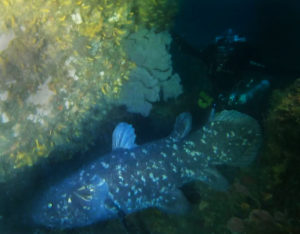 The address was by Prof. Mike Bruton.

Mike Bruton studied ichthyology at Rhodes University and took over from Margaret Smith as
Director of the JLB Smith Institute of Ichthyology (now the South African Institute for Aquatic
Biodiversity, SAIAB) in Grahamstown. He has had a stellar career as a researcher, research
administrator and science educator and was recently shortlisted for the ‘Science Communicator of
the Year award by the National Science and Technology Forum, from which he received the
Lifetime Achievement Award& in 2002. He is a Fellow of the Royal Society of South Africa and has
received an honorary doctorate from Rhodes University for his services to science and science
education. Mike has retired to Cape Town where he is active as a public speaker and writer of
popular science books.
Today he will talk to us on the remarkable life, and important contributions to museology and other
fields, of Marjorie Courtenay-Latimer