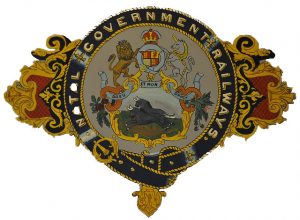 The development of railways in colonial Natal is a story as full of intrigue and attempted chicanery as a good detective tale and all the more enjoyable because it is true.

Railways which had developed from industrial wagon ways transporting mainly coal, limestone and iron ore into full-blown passenger and freight operations by the 1830’s in Britain were but a dream in the south of Africa.

For over 150 years in southern Africa transport had consisted of horse, mule or ox wagon whilst ships provided a much faster means of moving people between the main ports.

The Cape had early European settlers who arrived before railways; in 1820 an influx of more Europeans arrived, also pre-passenger rail; but by 1849-1851 the Byrne Settlers would have been more than familiar with railways and the enormous benefits that accompanied rails arrival. Railways in much of Europe had literally given birth to the world largely as we know it.

At the same time ships that arrived after many weary months voyaging from Europe regularly foundered as they arrived off Durban because of the infamous bar at the harbour entrance. John Milne who was effectively the first harbour engineer proposed a solution; namely that by narrowing the entrance increased speeds of water in tidal flows would scour the bar away thus making the entrance deeper. His proposal was accepted and Milne proceeded to build a wooden railway to bring quarried stone from around the Bluff for transportation across the harbour there to build the northernmost pier. The sight of teams of Oxen being urged on by their Zulu handlers and swimming across the harbour mouth were reportedly famous at the time.

William Campbell, who went on to be a leader in the new sugar industry, was the co-partner building the wall. But politics interfered even then and the project was dropped until the 1880s when eventual completion proved that Milne’s ideas had been correct. Note too that much of Campbell’s wall survived; being incorporated into the 1880s structure.

Look back at Durban in the 1850s and we see a developing small town with densely forested hill, now the Berea, overlooking it. When the Umgeni was in flood it changed course and stormed across the flat marshy lands of Stamford Hill to pour into the Bay at Cato Creek. The beachfront as we know it was tall Coastal Forest and the streets either sandy tracks or slushy ruts depending on the season.

Goods offloaded at the Point moved inland on ox or mule wagons so it was little wonder that the citizens clamoured for a railway. The good businessmen of Durban saw this as an opportunity to aid development and turn a profit, so the Natal Railway Company was formed by Public Subscription and on 26 June 1860 the first steam train ran from the Point to Market Square. It was a day of huge celebrations although the wild inclement weather that all but destroyed marquees, was almost a reflexion of the entire life of the little railway that hardly ever paid a dividend and was engulfed by the Natal Government Railways a decade and a half later.

It was a railway to nowhere and even when extended to the Umgeni in 1867, this extension being paid for the Colony and rented back for operation by the NRC, it still generally limped along. Built to ‘Standard Gauge’ of 1435 mm which was soon agreed as too wide for economic railway construction across South Africa’s steep hills and deep valleys it was displaced by Cape Gauge of 1065 mm within a few years. 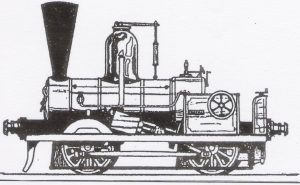 Meanwhile South Africa, and its wealth, was being discovered by the World. Steamships were beginning to sail alongside sailing vessels. Ships going to the Indies or Australia stopped at the Cape for all manner of things including coal.

Railways needed coal and it was found that coal was to be found in Northern Natal and probably other minerals too. In the 1860s diamond exploration was exploding in the Northern Cape and by 1871 mining the Big Hole started in Kimberley.

Then, as now, smart opportunists arrived from overseas and offered deals that would make them blindingly wealthy, mostly at the expense of the desperate and therefore gullible colonists. There were parallels to some of these schemes in the United States where two railroads raced to meet each other and build the Trans-continental; one climbed from the Pacific across two mountain ranges whilst the other drove rails across the prairies where there was never a tree to make sleepers. Vast sums were dispensed by government and many men became fabulously wealthy whilst all too many of those employed remained under or even unpaid to the end. This was a tale although over-simplified, that caused the Government of America to be really tough on railroads for the next 100 years.

Thankfully Whitehall said no to these nefarious local schemes but by 1875 had agreed to support the building of a railway from Durban to Pietermaritzburg, to Verulam and to Isipingo with the Natal Government Railways being created by Act 4 of 1875. A related Act authorised the borrowing of the estimated cost of construction which was £1 200 000.00 – a hefty sum for a small colony and history records that not every member of the legislature was in favour of this huge commitment.

New Year’s Day 1876 was again one of great celebration with thousands crowding Drew’s Corner in Pine Terrace where a huge arch emblazoned with God Save the Queen (Queen Victoria then being Empress of India and Queen of a quarter of the planet), the first Sod was Cut to mark the start of construction. Today we may wonder at this apparent excess but to the people at that time it was the equivalent of a Space Launch to another World.

Railway construction raced ahead, the Umbilo River was safely bridged and tested in August 1877 whereafter the line soon started its climb via Bellair to Pinetown which actually opened in September 1878. The railway climbed Fields Hill then marched along its present route of Gillitts, Hillcrest and on to Bothas Hill which was opened by March 1879. At this time the sad conflict between Britain and the Zulu nation intervened and the railway conveyed passengers and military personnel and supplies only for some while.

The next section was a really tough one and not made easier by the need to cross the lovely Inchanga Gorge on a high viaduct which due to the lack of suitable local building materials had its specification changed to being made of iron. When finished the Inchanga Viaduct was notorious, swaying alarmingly in high winds and requiring ‘policemen’ to ensure loco drivers crossed at a crawl at the best of times. At the worst of times passengers disembarked and walked across this towering structure to reach Wallacetown Station on the other side. But once crossed the trains were able to run into Pietermaritzburg by 1 December 1880 – and yes you probably guessed – once more to a tumultuous reception with day long celebrations and riotous party.

Thankfully the line was changed to run through Inchanga in the 1890s whereafter a passenger train service was provided for another century. Also in the 1890s the NGR reached Charlestown on the border with Transvaal and soon obtained agreement to operate into Johannesburg where gold had been discovered just a few years before.

From its shaky start the NGR within 30 years developed into such a sound railway that by the 1900s it built trains in its Durban Workshops for the Cape Government Railways and following Union in 1910 provided the first Locomotive Engineer for the newly formed South African Railways and Harbours.