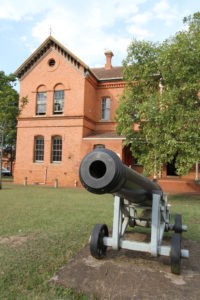 This police station in Alexandra Road in Pietermaritburg, was formerly the Natal Mounted Police Barracks. Built  by Colonel Hime and completed in 1890. The front facade shown here forms the front of a U shaped building. It is a heritage site and still used as a Police Station.