PARKING:        Off Bram Fischer/Ordnance Road [next to the Museum]; security person is present

FEATURE:        An update on the recent history of the Durban Natural Science Museum and on the conservation status of the waterbirds in Durban Bay

The Durban Natural Science Museum, long ensconced in the City Hall, expanded its operations to the old Moth Hall several years ago. The first part of this talk will briefly review the history of this move and provide an update on the current status of the Museum generally. The second part of the talk will focus on research by the Museum’s Bird Department into the history of the conservation status of the waterbirds inhabiting Durban Bay over the long period of the harbour’s development.

SANS is delighted that David Allan will be talking to us as this embraces our conservation goal whilst keeping us abreast of developments in the Durban Natural History Museum.

Remember friends are welcome at SANS Meetings especially in this the membership drive year.

Gallipoli occurred a century ago this month so Robin Smith’s in depth and enthralling presentation was well timed. It was also of special interest to South Africa because General Sir Ian Hamilton was in command. And it was of special interest to Australians and New Zealanders who did not forget Churchill’s ill-judged decision to try and take the Dardanelles in this way for in the next war they refused Churchill’s request for their troops to remain in Europe and returned to Australia to protect their homeland from the fast advancing Japanese. And if perchance anything is misquoted blame the editor not the presenter. 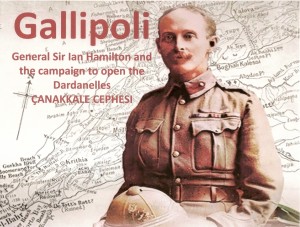 The Dardanelles have for long played an ongoing and critical role in history because they are so strategically important controlling the passage from the Danube and the Black Sea into the Mediterranean. Russia and Turkey have fought over this area for two centuries. Long centuries before that Xerxes crossed to invade Greece. Later Alexander led his troops the other way. And for the romanticists Rubens painted Hero and Leander in 1605. There is no tide through the Dardanelles but the current runs at five knots although various folks since the mythical Leander have swum this narrow strait.

After deciding that an Army was required because the Navy could not force a passage and control this vital waterway, General Sir Ian Hamilton was appointed to the task. At this time he was 60, had been wounded in 1880 when his left hand was crushed, had twice been recommended for the VC but as a free thinker was probably not wanted in Europe. Hamilton had some questions but Churchill was feverish that he should leave that day so with dreadfully poor intelligence he left.

Meanwhile mail from the High Command in Britain was sent ordinary post to Egypt providing the enemy with priceless information as this appeared to be like an open secret.

Now let us look at this event from the Turkish side. The Ottoman Empire in the 16th C stretched from the Danube to the Sahara but this area had been lost in the 17th.

In the Balkan War of 1912 Turkey again lost much of its territory but recovered most of this in the second Balkan War of 1913. Mustafa Kamal who later became the first President of the newly founded Republic of Turkey arrived in Gallipoli on 1st December 1912 and whilst he was part of the unsuccessful 1912 campaigns he played a key role in the successful 1913 battles.

At the start of WW1 Mustafa Kamal realised that Turkey needed a friend and Germany soon proved to be just that. Furthermore he not only anticipated the Allies would attempt a landing on Gallipoli but also the places where they would do so. With some assistance from German commander(s) he built a non-commissioned officer command structure which had previously not existed and then went on to build the defences including gun batteries overlooking the sea which pummelled the British navy. The Turks fought valiantly and effectively and these defences proved impossible to over-run. This ultimately led to the withdrawal 10 months later following massive loss of life. This withdrawal was described as the only aspect of the campaign that warranted the description flawless.

One little piece of history that emerged from this campaign was an interview made by Keith Murdoch, (journalist father of Rupert Murdoch the media baron)  with General Sir Ian Hamilton which ultimately led to a change of command. Wikipedia provides more background via this link: http://en.wikipedia.org/wiki/Keith_Murdoch

Today Gallipoli is as sacred to the Turks as it is to the allied nations who fought there. There are 36 war cemeteries on the peninsula. Some huge monuments are a feature, the largest being the Turkish Victory Arch and graveyard. There is also a monument to the Turk who rescued a wounded ANZAC soldier in no man’s land. But by far the most evocative is the 4-metre high granite plaque with the excerpt from Ataturk’s speech of 1934.

Here’s a link to the biography of Mustafa Kamal Ataturk in Wikipedia: http://en.wikipedia.org/wiki/Mustafa_Kemal_Atat%C3%BCrk

These links have been provided because it is impossible to publish the wealth of fascinating information given in this well researched and presented paper. Robin has also given the following suggestions for folks wishing to learn more. The book “Gallipoli” by Robert Rhodes James is the best one, in his humble opinion. Les Carlyon is an Australian and his book reflects some Australian views and prejudices! Peter Hart writes well but some of his data is a little doubtful. Tim Travers is a Canadian history professor and his book is also recommended. Erickson’s book is very technical and is not easy to read. He also highly recommends A.P. Herbert’s memoir “Mons, Anzac and Kut”, available as a reprint from Naval & Military as well as Compton Mackenzie’s “Gallipoli Memories” which is well worth reading.

For Gallipoli go to:  http://en.wikipedia.org/wiki/Gallipoli_Campaign

For ANZAC look at: http://www.nationalanzaccentre.com.au/