The Ken Gillings Memorial Lecture was held on Tuesday 9 October 2019 at KwaMuhle Museum.

Prior to the lecture by Dr Zaborowski, the full house was addressed by Dr Graeme Fuller, a committee member of the Society, on the late Ken Gillings. He outlined Ken’s life which incorporated his time in the Field Artillery, member of Rotary, SANS, SAMHS, Gunner’s Association,his professional Tour Guiding (battlefields) and his devotion to his family. Ken was professional in all he applied his mind to, which included his battlefield guide books and other publications, mainly in the military arena. His wisdom, wit and knowledge continues to be missed.

The talk by Dr Anthony Zaborowski, was enjoyed by members and non members alike, many of whom had links to the refugees from Poland.

He outlined the background to the challenges that had been faced by Poland, over many centuries, with little respite from unwanted occupation, the Russians in particular, but also Prussians and French.

The greatest disruption came with the invasion of Poland by Nazi Germany in 1939, shortly followed by the Russians who occupied eastern Poland. Many Poles (Polania) were sent off to Gulags in Russia or the German Camps set up mainly in Poland. When Russia became allies of the west after the German invasion of Russia, pressure was placed on the Russians to free Polish POW’s and imprisoned Polish civilians. In addition many women and children from within Poland, were allowed to leave.

Members of Dr Zaborowski’s family were amongst these refugees who made their way out of Europe and on to destinations around the world. The conditions were appalling and many died in the cattle trucks and along the way. Dr Zaborowski family members ended up in camps in Northern Rhodesia (Zambia). Many of these refugees elected to stay on in Southern Africa (estimated 25000), due to the post war occupation of Poland by Russia.

The Polish diaspora in southern Africa have continued to make a huge economic contribution here and indeed wherever they eventually were allowed to settle. 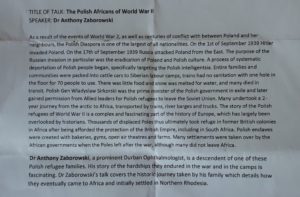