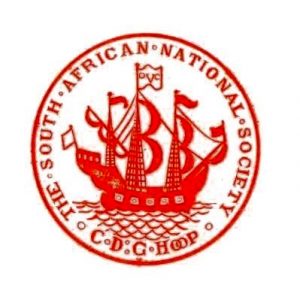 The South African National Society (SANS) was founded in Cape Town in 1905 after a series of meetings which began the year before and involved such notable people as Lord de Villiers and J.H. Hofmeyer. The stimulus for its establishment seems to have been the threat to the existence of Cape Town Castle. Mrs. Koopmans de Wet a foundation member of SANS was particularly active in the successful campaign for its preservation. Other campaigns followed. The realization of the need to protect the rapidly dwindling rock art and floral heritage of southern Africa resulted in the “Bushman Relics Protection Act” in 1911 after significant pressure from the politically connected members of SANS in the young Union government. The 1911 act followed legislation which had been passed in the Cape Government which had been passed in 1908 to protect funa and flora there. These same members had played a leading role in the establishment of Kirstenbosch Botanical Gardens in 1913. SANS continued to play a significant though diminishing role in the preservation of South Africa’s heritage in the twentieth century.

Immediately after its establishment however, many different branches were established in a variety of different centers even before Union. The Natal branch was founded in 1907 and was for many years chaired by the Administrator of Natal. Subsequently two separate branches were developed in Natal—one in Durban and the other in Pietermaritzburg. Sadly, as the century wore on branches faded and in 1980 the Cape Town branch closed leaving the Durban branch as the sole remaining branch in South Africa.

The aims of SANS is clearly spelt out in its constitution and a brief synopsis of its aims are:

With these aims it is hardly surprising that the late Dr. Killie Campbell was deeply involved in the local branch of SANS in Durban and besides her unique contribution through her home Muckleneuk, she spearheaded the drive to ensure the preservation of the Old Court House, now the Local History Museum as well as the Robinson home, now the Old House Museum. Working in tandem with her longtime friend and fellow member of SANS, Daphne Strutt, they played a significant role in providing some of the exhibits and old photographs for the Durban Room of the Local History Museum. The preservation of Drakensberg rock art together with the preservation of the Dlinza forest near eShowe are further examples of the work of the local branch of SANS.

Since 1982 the Durban branch of SANS has awarded the Dr. Killie Campbell Memorial Bursary to post graduate students to further their studies relating to Natal history in honour of Dr. Campbell’s work. Two recent recipients are Barbara Wahlburg who became head of research at the Albert Luthuli Museum and Mxoloisi Mchunu presently senior research officer of the KZN Legislature research library.

In 2018 the amount of the Killie Campbell Bursary will be R 18000.00 and details of how to apply to the KC Bursary Selection Committee will be posted on this website in late March or early April.