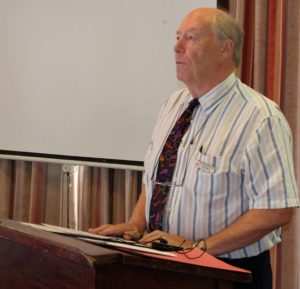 The following address was given at the 2018 AGM to record and give thanks to Hardy and Astrea for their dedication to the Society over the years.

I first met Hardy when he joined Port Natal Round Table in the early seventies, over 40 years ago .

know accompanies all his undertakings. Whether it was erecting the Christmas Tree hut,

He managed to persuade a few of us to go on a memorable Wilderness Trail in Umfolozi,

where I was continually amazed by his awesome bird recognition skills. It was rather an a

adventurous expedition, the highlight of which was the whole team being chased by a rhino.

After Round Table, he joined Rotary Strelitzia, and both he and Astrea were instrumental in

their new  Club’s rapid success, both with rewarding projects, and tremendous fellowship.

When they decided to emigrate to Australia, we all missed their warm friendship and total

commitment to the community at large. However, all their friends realised they were

strongly drawn by family ties, and Hardy and Astrea decided to return to South Africa.

As he was looking for something he could get his teeth into, I managed to persuade Hardy to

join  SANS, and in his usual style, he proceeded to participate energetically in the Society’s

activities, rapidly ascending to the office of Chairman.

During his term of duty at the helm, he has set an exemplary level of involvement, which

will be very difficult to match, particularly his superbly compiled newsletters.

He enthused his fellow committee members to give of their best, and the Society is now in

He was also very involved in the Railway Society at the same time, where, I gather he made

However, in the past couple of years Astrea, has suffered poor health

and this has led to their making the difficult decision to return to Australia to be close to,

and have the support of, their daughter, grandson, and most importantly the young great-

I am sure you are all saddened by this sudden turn of events, but support their decision in that

This will be the last meeting that we are all together, and, on behalf of the SANS members,

valuable contributions and fellowship over the last few years.

We wish you bon voyage, and a very happy life back in Perth, where you will settle in and

catch up with your many old cobbers.

We’re going to miss you both, but please stay in Australia long enough for us to come and